Offical Harry Potter and the Half Blood Prince Trailer

So, that's the official Harry Potter and the Half Blood Prince trailer. I LOVE it! What do you guys think? It looks veeeerrry creepy and apparently, the young Voldemort is the nephew of the actor who plays adult Voldemort. Cool. Can't wait!
at July 31, 2008 3 comments:

Email ThisBlogThis!Share to TwitterShare to FacebookShare to Pinterest
Labels: Harry Potter, obsessions, that wizard boy you like so much (dad)

Tomorrow (Thursday, July 31) Stephenie Meyer is going to be on Good Morning America on ABC. Yay! I know she won't reveal any spoilers, but I'm definitely looking forward to it. :)
at July 30, 2008 2 comments:

Yesterday was one of the best days I've ever had since I started this crazy journey as a soon-to-be debut author. (That's why I'm typing in purple--it's a pretty celebration color!)

No, it wasn't a day I inked a new deal--it was actually more than that. It was a fantastic day of chats with Editor K and Agent A and I'm finally starting to feel that I can do this! I've always been reeeaaally insecure about the author gig. You know, we all have those thoughts of I'm not good enough! Eeek, my writing is horrible! Will anyone buy my book?

I know those insecurities will come and go (and will probably be amped up as my pub date approaches) but yesterday, for a full day, I felt great about how far I've come since I started writing and am looking forward to where I'm going. :) It's all a giant learning process and though I've learned a lot, there's still sooo much more!

Special thanks to Jessica Ferguson for posting this and this!

Just a reminder--I'll be teaching an online course through Lamar University called "Writing for Teen Magazines." You do NOT have to live in Texas to take the course and it starts August 11 and runs until September 22.

For details, visit the above link! :)

And...check out this week's Entertainment Weekly (the one with Batman on the cover) because inside is writer/friend Kaleb Nation! Yay, Kaleb! :) As if you already didn't know, Kaleb is the Twilight Guy.
at July 26, 2008 3 comments:

Email ThisBlogThis!Share to TwitterShare to FacebookShare to Pinterest
Labels: lamar u, writing course

Contest alert! Emily Hendricks told me about this:

Email ThisBlogThis!Share to TwitterShare to FacebookShare to Pinterest
Labels: contest

I’m stealing this from Sara Hantz.

The Big Read, an initiative by the National Endowment for the Arts, has estimated that the average adult has only read 6 of the top 100 books they’ve printed. How do you do?

1) Look at the list and bold those you have read.
2) Italicize those you intend to read.
3) Underline the books you LOVE.

I cheated because I’m lazy and just bolded the books I’ve read and skipped the other steps. (If you see italics, they're Sara's.) Fun!

Email ThisBlogThis!Share to TwitterShare to FacebookShare to Pinterest
Labels: meme The reason I missed Gossip Girl.... Did you guys see the new TWILIGHT trailer from July 17?? OMG. So. Freaking. Excited. :) It's helping to ease my insane want for BREAKING DAWN.

And those pics were from the out of nowhere storm we had yesterday. We were without power from 7:15pm to 9pm and it was kinda scary. There were insane winds and lots of rain. This tree fell on the powerline right across the street.
at July 22, 2008 3 comments:

Another thing for me to obsess about...

I have an Amazon sales ranking! Woo hoo! Thank you to whoever pre-ordered copies. That's so sweet! :) Last week, I blogged that there's an alligator in my tiny neighborhood lake. Well, on Friday evening, I saw him/her!! That's not my pic, but I am planning to go back to the lake this week and try to snap a pic of the gator. She (it just looks like a girl...I don't know why) is less than four feet long and has the coolest way of hovering in the water. A little girl and her dad were feeding bread to the non-existent geese and the gator appeared in the water and eyed us. I kept having Lake Placid flashbacks. Yet, I'll be going back to the lake to capture gator pics. Hopefully. And now...onto other things. Yay for Tina Fey's 30 Rock. Seriously. We need to reward more women in comedy. I started watching the show after it had been on air for a while and I love it. Go, Tina! Ryan Seacrest also got a nod for best reality TV host. I <3 style="font-style: italic;">Idol takes 3 hours to tell us who won. He fills the time well, I think. But no nod for So You Think You Can Dance?'s Cat Deeley? C'mon! She's funny and she has visible sympathy for contestants when they're in the bottom. Maybe next year... And what about my Desperate Housewives? The show was back on track last season and Marcia Cross and Felicity Huffman were particularly outstanding. I mean, really, Felicity was going to shave her head (Eva Longoria-Parker stopped her) to better portray Lynette's cancer scenes. Talk about dedication. Ah, my fav for last. Mr. Spader. How I love thee. I hope he wins again for Boston Legal. He's the dirtiest, funniest guy on the show and I'd love to see him nab another trophy.

Guess what I have in my possession? A cover proof of Take the Reins! Yep, front and back with gloss and everything. Oooh la la. Veeerrry, veeerry gorgeous. (*Waves at Jessica Sonkin*) I'm framing it.

I took a pic of myself holding the cover proof and when I'm allowed to share it, I will!

The Website design for CanterwoodCrest.com is in full swing (woo hoo!) and the new site is coming this September. It's going to be great.
at July 17, 2008 3 comments:

Take the Reins cover is now on Amazon--yay! I live in a suburban neighborhood. My city has 100,000+ people and it's not exactly a place to find wildlife. But there are alligator sightings at my neighborhood lake. We have beavers (I've seen 'em), snakes (obviously), fish, turtles and other usual lake-like creatures. Now, people are claiming they've seen a three foot gator in the lake.

I, of course, now have to camp out at the lake to spot said alligator. I've only seen one in the wild once when I was down in South Florida at least ten years ago. I'm considering dragging a lawn chair down there and staying until I spot it. :) So much better than Animal Planet!

Have you seen a gator or other interesting/unusual wildlife before? Share!
at July 15, 2008 8 comments:

5 Things I'll Do If I Become a Famous Author

I was tagged by Kaleb Nation, so here goes!

Email ThisBlogThis!Share to TwitterShare to FacebookShare to Pinterest
Labels: vlog

This is the second pick for my best beach reads for summer! Hope you guys like my review of RITES OF SPRING (BREAK) by Diana Peterfreund. :)

I've been reading like crazy this past weekend and now beginning of this week. When I get so wrapped up in writing, my reading time gets restricted a bit. But I've been on a little writing break, so I've been attacking the books in my gotta read pile.

First, Diary of a Wimpy Kid. Don't know WHY I didn't read this book before now. OMG, it's one of those books where I sit up and say, "Damn! I wish I'd written that!" If you haven't read it, it's fun, fantastic and one of the best boy narrated books I've ever read. I've got the second one on order now.

I've also gotten addicted to the Beacon Street Girls series by Annie Bryant. They're adorable tween books and they have this timeless feel because they aren't overly peppered with fast changing pop culture references. Love them.

Then, I read Off Season. It's even better than Dairy Queen. So. Good.

My list is still long with several Class of 2k8 books and various others. I'm getting through it, though.

Email ThisBlogThis!Share to TwitterShare to FacebookShare to Pinterest
Labels: TFC

Pics of my writing space

First, thank you all for your kind comments about the Take the Reins cover! If you haven't seen it yet, check yesterday's blog post. :)

Today, I wanted to share pics of my summer workspace... During the fall, I do lots of writing on the back porch or in my recliner, but during the summer I like to be sandwiched between these two windows so I get lots of sun.

I don't use the keyboard on my computer because of my carpal, so I have to always have my external keyboard and mouse.

My hardy Gateway is almost on its last noisy breath. It has gotten me through three books, a zillion articles, four years of college and other random activities. First of all, I am SO sorry for posting three times today! BUT...my cover is up on S&S's Website, so I think I can share!!!

That's my girl Sasha and her horse Charm.

ISN'T IT BEYOND FANTASTIC?! OMG! :) I'm soooo happy to share with you guys!!

Thank you, thank you to Agent A and everyone at S&S, especially Editor K, Jessica, Russell, Karin, Monica and the rest of the crew at the shoot.I heart you guys!

Email ThisBlogThis!Share to TwitterShare to FacebookShare to Pinterest
Labels: cover, Take the Reins

Mary, Suz and Mandy were nice enough to let me guest vlog over at Lip Gloss Lit with this video today. Check out their awesome blog! :) 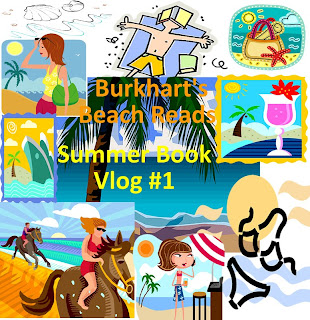 Coming soon to a screen near you. :) (Yeah, I spent waaaaaay too long making that thing, but it was fun.)