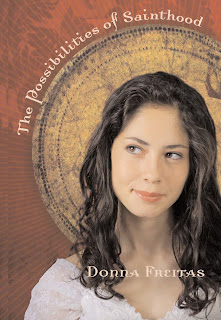 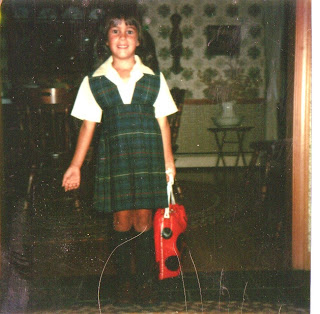 Aww! Look at Donna in her Catholic school uniform! 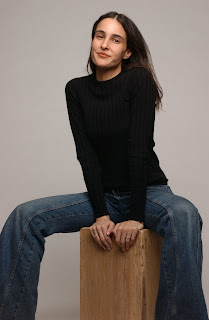 
THE POSSIBILITIES OF SAINTHOOD got a glowing review from Gregory Maguire (insert fan girl squee here!). What was your first thought when you read the blurb?

Um, Eeeeeee!!!!!!! OHMIGOSH, Gregory Maguire (who I adore) liked my novel! (And thanks for the accompanying squee…) I was so stunned when I saw that beautiful blurb he wrote, with all its allusions and clever references to the novel. For a couple of weeks (and still occasionally), I wandered around excitedly repeating to friends willing to humor me, “Behold! My book is apparently a rare bloom according to Gregory Maguire!”

Probably the most special part of the blurb—and this almost makes me cry thinking about it even now—was the end which says, “Let us rejoice and be glad.” I assume he is alluding to a popular church hymn (and keep meaning to write and ask him but am afraid of sounding cheesy) called “This is the day,” which repeats that bit of the blurb many times in the lyrics. The reason it makes me all teary is because my mother used to sing that hymn all the time when I was growing up and when she was cooking in the kitchen. I can hear her voice clear as a bell when I read that lyric. THE POSSIBILITIES OF SAINTHOOD is dedicated in memory of my mother, so it was almost eery wonderful to have his blurb end that way.

What qualities of Antonia do you see in yourself? What does she possess that you don’t and wish you did?

Antonia is boy crazy and I was so boy crazy when I was in high school! She is also very invested in the relationships in her life—be they with family or her best friend or her potential loves, even if some of those people drive her crazy sometimes. That’s very Italian of her and, as a fellow Italian, I love my friends and family dearly and surely drive them mad because of this occasionally.

We are both very passionate about life—which can lead to good things but also tricky situations. (And for those of you who have read the story—EVERYONE keeps asking me if this one particular scene, probably the most ridiculous one I wrote, is autobiographical. NO!!! It isn’t! I can’t believe people keep asking me about it—you’d/you’ll know if you read the book—everybody brings it up after they finish. I SWEAR it is complete and utter fiction. Totally made up. Really.)

What I wish I had that Antonia does is this unbridled optimism—she reaches for living sainthood which is really an impossible, even a ridiculous quest—and she goes after it with so much energy, so much persistence. I wish I was that diligent. She also works so hard—at school, at her family’s Italian market, helping her Ma and Gram keep things together. Antonia’s a bit of a rock in her Italian immigrant family and sometimes I wish I had more of that steadiness.

In addition to being a novelist, you’re also a freelance writer. Did your freelance background help you on your path to publication for THE POSSIBILITIES OF SAINTHOOD?

You know, the funny thing is, I assumed that all the freelance writing I do for different newspapers, magazines, blogs, and book review publications would be a huge factor in whether or not a house would want to buy my novel. In the adult nonfiction world, it’s all about who you’ve written for, what kinds of pieces (op-eds? features?), how those contacts will help get the word out about your book.

Turns out: it doesn’t matter at all! I mean, I think my editor finds it interesting that I do all this freelance, but all anyone cares about with novels is the actual novel (shocking, I know). Is it good or not? Period. That scared me to death. I couldn’t believe somebody actually wanted my story for my story’s sake alone and not for what’s on my CV. It’s refreshing really, now that I got past my debut!

You’re an assistant professor of religion at Boston University. How do you juggle teaching, writing and all of your other activities?

Um, with great difficulty. I wish I was better at juggling! My friends and just about everyone else who has ever written me an email knows that I am very slow to respond. And sometimes I wish I would simplify my life (or that, I don’t know, Oprah would come and show me how I can simplify it). But then, I love everything I do! I love being a professor, teaching, writing in so many different genres, and speaking to different groups and audiences. I feel lucky to have so many opportunities.

And then, sometimes I just feel really tired and watch hours and hours, I mean, we are talking marathon hours of television. Anything with vampires. Entire seasons of Buffy. I have so much guilty pleasure TV it’s embarrassing. (I’m not sure it helps with the juggling, but I sure do love watching!)

What was the easiest thing about writing THE POSSIBILITIES OF SAINTHOOD? The hardest?

Capturing Antonia’s voice was by far the easiest part, and the most exciting. The strength of her voice in my mind was what compelled me to write the story in the first place. I’ve jokingly started conversations with other writers that go something like... “So…is it just me or do you hear the voices of your characters, too?” only to find out that I am in good company on that front—lots of fiction authors talk about how they can hear their characters talking away. I loved how strong Antonia’s voice was when I was writing since it made working on the first draft so much fun.

The hardest part was definitely the revising and editing process. I love the experience of a story just pouring out on the page during that first draft, but I find the second and third (and fourth and fifth!) drafts really grueling even though they are so important. Lucky me I have a dream editor, Frances Foster at FSG. She’s kinda my heroine.

What was the most surprising thing you learned about being a debut author?

That there are so many other debut novelists and it’s such a welcoming world. I love meeting all these other writers (like you Jessica :)) who are coming out with their first novels. Everyone is so supportive. I’ve made lots of new friends.

If you could speak to a roomful of aspiring writers who want to freelance and write novels, what advice would you give them?

Well, it would be two different types of advice.

For freelance—to start small and be committed to whatever publication that gives you your first break. Once you have your foot in the door it always leads to other opportunities. At first you say yes to everything, and then suddenly you find yourself with more work that you can handle.

For novels…wow. I’m new at it myself so it’s strange to think of being in a position to give advice. The only thing I can say is finish the story first. Then you know you can do it. You may not publish your first novel (I mean, I didn’t—I have all sorts of other stuff I’d tried sitting on my laptop), but if you truly love writing and keep at it, something will come…

What’s next for you? Give us the scoop!

A sequel to THE POSSIBILITIES OF SAINTHOOD is next! (I think…unless FSG switches it with my “other next” novel.) The second book is called THE PATRON SAINT OF KISSING. The third novel I have with FSG—which I’m not ready to talk about in terms of specific content—is so dark compared to Antonia’s story. I’m a little nervous to have written something that is such a departure from the upbeat humor of POSSIBIITIES. But maybe (hopefully!) people will like it anyway…

Thank you so much, Jessica, for having me as a guest on your blog! These were great, fun questions. I had a blast answering them.

I love all the fun things you do on your blog. I especially like this clip from the interview with Donna: "but if you truly love writing and keep at it, something will come…"