Got something to ask about the books, writing, etc? You can do it here since I'm veeeeeerrrrry backed up on e-mail. I'll do my best to check throughout the weekend and answer as I can. If the question's already been answered, I'll try to point you to the link. :) Check my FAQ at the Canterwood Website or my Website and see if anything there's already answered. If not, ask away!

Hope you reader girlies are having a fab Black Friday and aren't getting run over by crazy crowds! :)
at November 27, 2009 54 comments:

Happy, happy Thanksgiving, everyone! I'm off to celebrate and hope you're all doing the same. :)

With other authors TBA.

It's on December 7th from 4-6pm. I don't have a flyer for this year yet, but last year's said attendees had to RSVP. Once I have that info, I'll post it. :) Hope to see some of you!

Email ThisBlogThis!Share to TwitterShare to FacebookShare to Pinterest
Labels: event

To clear up a little confusion

There have been a couple of e-mails and I wanted to address them here since I can't respond to every e-mail right away and write the Canterwood books. You guys wouldn't want them to come out, like, once a year would you? ;)

* Canterwood isn't a real school. It's completely made up.

* No news yet on the TV option for the books. I PROMISE that I'll post it here the second I know something.

* Yes! There are going to be 12 books and Little White Lies comes out on December 22, 2009. It'll prob start showing up a week or so early in stores. Rival Revenge comes out the very next month--January 26--just a few days before my birthday. :)

* I can't show the cover for City Secrets yet, but the second Editor K says I can, I'll post it here.

And, finally, Burkhart is not my real last name. It's a pen name that I'm using for the Canterwood series. If you e-mail and ask for my real name, I won't give it out (sorry!) for privacy reasons. You totally get that, right? :)

But know that it's ALWAYS me e-mailing you, Tweeting, blogging, etc. I'm working hard to e-mail as many of you back today as I can. Thank you sooo much for being on Team Canterwood and it means more than you know.

Email ThisBlogThis!Share to TwitterShare to FacebookShare to Pinterest
Labels: random

Chillin' on a Saturday

Well, kind of. I'm playing with a couple of outlines, thinking about new ideas, cleaning and running errands. I went to my local B&N and signed stock. Check out my Tweets on my sidebar if you want to see a pic. They only had 1 copy of BEST ENEMIES, so that was cool.

Now we must talk Twilight and New Moon. Be prepared for girly craziness. :D

On Thursday, my theater was cool enough to show Twilight first, at 9:15 and then to show New Moon at midnight. I was freaking out all day and even only drank 1 Diet Coke so I didn't make BFF crazy with my already hyper state. One of our convos that day:

BFF: Are you totally spazzing?

Me: YES! But I only had one Diet Coke since, you know, I want to live and you'd kill me in my hyper state.

BFF: Ohhhhhhh, greeeat. (She was half-serious.) ;)

She told me to just go to our fave place for sparkly drinks and to calm down before she got there. I tried and spent 20something minutes talking to anyone near me, including my fave BR peeps, abt the night's awesomeness.

BFF arrived with a rose for me (again, pic on the Twitter feed) 'cause she knew tonight was a huuuuge deal for me. We talked Twilight/New Moon and eventually headed to the theater where we meet up with her boy.

Since I'd never seen Twilight on the big screen, I almost lost it when RPattz walked into the caf for the first time. It. Was. Awesome. Watching Twilight on a screen that size was like I'd never seen the movie before. I started thinking about where I was that time last year and remembered BFF had called me just before going to see Twilight at the same theater and telling me about it. Very cool that we got to see it together. Surreal.

Then...25 mins till New Moon. Everyone was ready. The theater was packed with all ages and lots of guys. (Most of whom were Team Jacob when they vocalized it in the theater.) The movie started and I thought hyperventilation might occur. But, you know, I stayed cool. Ish. ;)

The movie crowd was the best--there was cheering, sighing (longing sighs), and shout outs for Jacob or Edward.

* Taylor Lautner (Yes, I put him first.) The kid thought he was going to lose his job after Twilight and he worked his butt off to put on 30 pounds of muscle to play werewolf Jake.

* RPattz looking as if he'd been dying without KStew during their separation.

* Alice driving the car through Italy.

* The fight sequence with the Volturi.

* Dakota Fanning killing it as Jane. Scary with the red contacts. And speaking of...

* New contacts for the vamps. Awesome.

* The special effects for the wolf transformations. I was a little worried, but they pulled it off quite well.

* The acting. Much improved.

Okay! Forcing myself to stop here. :) It's better, in a different way, than Twilight. I cannot wait for Eclipse. Where's my countdown clock?
at November 21, 2009 13 comments:

I'm taking today off from work in girly fandom celebration of NEW MOON. I was sooo excited to learn this week that my theater is playing TWILIGHT first and then NEW MOON. I didn't see TWILIGHT when it was in theaters, so I'm insanely excited. I'm taking BFF and her boy (hopefully he'll make it) to the movies and I can't wait. Must call the theater when they open, so I can figure out what time I need to get in line to secure 3 seats together.

Anyone else going at midnight? Team Edward or Team Jacob?
at November 19, 2009 20 comments:

She was the first to email me to say a NEW title for the #10th Canterwood Crest book has been released on Amazon.

Can't wait for the CITY SECRETS cover to go up. I think you guys will heart it. <3

As soon as I've got time to sit down and write a decent blog entry, I've got a few things to share with you guys (not Canterwood related), so look for that soon.
at November 18, 2009 6 comments:

Soooo....can't wait till December 21 (says Amazon) when LITTLE WHITE LIES goes on sale? Well, you can read an excerpt of the book at Simon & Schuster's Website. Cool!

To those I was sooo looking forward to seeing at the Equine Affaire, I'm yet again under the weather and can't make it today. I'm so sorry and I hope you all enjoy the events.
at November 14, 2009 11 comments: 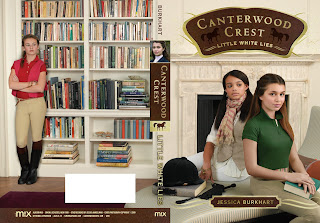 Since I can't share the CITY SECRETS cover yet, I thought post something else. This is the full cover for LITTLE WHITE LIES (Dec 22, 09). Pretty, right?

I've been getting so many awesome notes about when the cover for CITY SECRETS will be revealed. The answer? Not sure yet. It's almost done and as soon as I get the okay to post it, you know I will! I can't wait for you all to see it--it's so gorgeous and fun!

Plus, there's a twist to this book that'll make it unlike any other Canterwood book before it. :)
at November 11, 2009 21 comments: 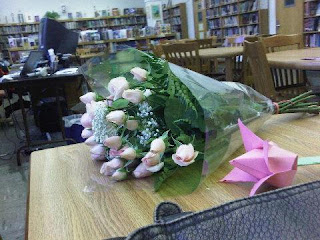 I just finished my first NYC school visit. I spoke to a group of sixth graders at Pershing IS-220 and we had a fun visit. They even gave me flowers--so sweet! I ran through my Power Point and the kids asked great, engaging questions.

The best part? I didn't spill coffee on my skirt (and I mean a LOT of coffee) until I was heading down the stairs to leave. Win!

Thanks so much to Lucia Greenberg for being a fantastic host. She took photos of the event and got releases from the students' parents, so I'll be able to post pics to my blog soon.

Gotta do some writing before heading into Manhattan for an appt. Happy Monday!
at November 09, 2009 14 comments:

First, I wanted to say THANK YOU so much to everyone who has been emailing, Facebooking, Tweeting, etc at me about BEST ENEMIES. You guys absolutely rock and I've been reading every message, but am this close to finishing HOME SWEET DRAMA, so I can't reply to email right now. I will when I turn in the final draft and have a couple of days to reply.

There were two pieces of press that ran last week about my involvement in NaNoWriMo or National Novel Writing Month. First, I was interviewed for Media Bistro and my article is part of a toolkit for people participating in this month's contest. You can see some of the article here and thanks to GalleyCat for featuring it.

Then, the SFist picked up the article and a columnist wrote about it. The article made me laugh because he said my NaNo tale was "inspiring/annoying." LOL. I can see that...

Email ThisBlogThis!Share to TwitterShare to FacebookShare to Pinterest
Labels: press

I didn't even know that the 9th Canterwood book was up on Amazon (no cover yet), but a supercool reader just sent me an e-mail saying it was there and she was excited. So, the ninth book is called CITY SECRETS and it comes out on July 10, 2010. Yay!

Also, the blog template is the process of getting a makeover. I love it!

I think (hopefully!) I'm back to regular blogging. I was really sick for 3 days or so and am finally back on my feet and feeling like normal. I was going stir-crazy after forcing myself *not* to do work after the 2nd day of being sick. But I think it was good to take a break. I'm only going to work for a couple of hours today, then I'm done. Got a sparkly event on Friday that I have to be in perfect shape for, so I'm okay with taking a slow week and then working like a crazy person over the weekend.

I hope everyone had a great Halloween! If you dressed as a Canterwood character, please email me a pic! I'd love to see. I've already seen a photo of a reader as Heather Fox and it was soooo cool. :)

Missed one of the contest prize winners! For the RIDE LIKE A GIRL bag and stickers, the winner is...E! E, please email me (jess_burkhart [at] hotmail [dot] com with your address so I can mail your prize. :)
at November 03, 2009 3 comments:

It's time to announce the winners of our giveaways! Again, thanks so much to the awesome sponsors. (All winners were randomly drawn from Blogger and LiveJournal.)

The I Love Horses bag:


Winners, please email me (jess_burkhart [at] hotmail [dot] com--with your parents' permission) your name and an address you can receive your prize. Congratulations!
at November 03, 2009 11 comments: