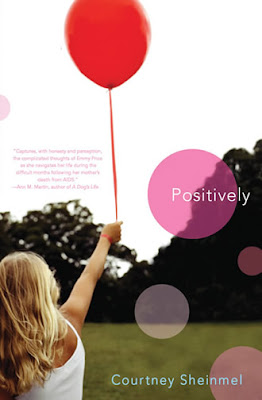 Emerson Price cannot remember a time when life was ordinary. She was four-years-old when she and her mom were diagnosed as HIV-positive – infected with the virus that causes AIDS, and eight when her parents divorced. Now she is thirteen and her mother is dead. Emmy moves in with her father and stepmother, but she feels completely alone. Even though everyone has always accepted her, no one – not her father, or stepmother, or even her best friend – understands what it’s like to have to take medicine every single day, to be so afraid of getting sick, and to miss her mom more than she ever thought she would.

When Emmy’s dad and stepmother send her to Camp Positive, a camp for HIV-positive girls, Emmy is certain she is going to hate it. But soon she realizes that she is not so alone after all – and that sometimes letting other people in can make all the difference in the world.

The author is donating a portion of her proceeds from this book to the Elizabeth Glaser Pediatric AIDS Foundation.

I read Courtney's first book, My So-Called Family, and loved it. I, of course, told her I *had* to get an ARC of Positively--or else. She sent me a copy and I fell in love with Emerson and her story.

The most touching and vibrant part of the book is Emmy's relationship with Lisa, her dead mother's best friend. Lisa, my favorite character next to Emmy, is less of a mother-figure and more of a friend to Emmy, which is exactly what she needs.

This book will not only introduce young readers to HIV and AIDs, but it will also spread the message that most kids with HIV or AIDs aren't asking for special treatment--they want to be like everyone else. Their lives are different and they can't ignore or forget about the daily pills or frequent doctor visits, but they can strive to live a normal life.

The best thing about Positively? The honesty of how kids with HIV deal with it day by day. Courtney's own background of volunteer work with Elizabeth Glaser's foundation adds definite authenticity to the story.

Positively releases in hardcover from Simon & Schuster on September 15. Find out more by visiting Courtney's Website.
at September 13, 2009

That sounds like an amazing book! I'm going to read it. ;)

Wow--this does sound amazing. I've read Courtney's first book, and she seems like a very talented new author. I love how she covers controversial topics and open teen's eyes to them. Way to go, Courtney!

This book has been on my wishlist FOREVER. Now you've just made me want it even more ;) I'll have to either demand my library gets a copy or break down and buy one myself.

That book totally tells about my views. Just because sick dosen't mean that people have to give you special treatment, I hate when people act like that. I might read the book. :)