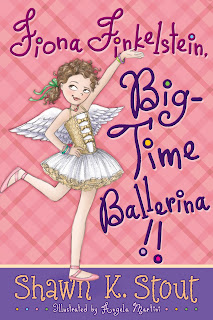 Book summary: Sometimes Fiona Finkelstein's life seems to be a lot like a TV show -- everywhere she goes, there's a lot of drama. That's what being nine in Ordinary, Maryland, is like when your dad is the chief meteorologist for the local TV station, your mom lives in California and stars in a soap opera, and your little brother thinks he's a superhero.

But right now, life is even better than TV, because Fiona Finkelstein has a chance to become what she's always dreamed of being: a big-time ballerina. There's just one problem: In her last recital, Fiona starred as the unforgettable Fiona VOMITstein -- all over the stage, and all over Benevolence Castles's can-can costume.

Can Fiona overcome her fears so that she can finally be a big-time ballerina in the local holiday production of The Nutcracker? Or will she remain the only one in her family who has the flat-out worst case of stage fright ever?

Bio: SHAWN K. STOUT never made it to the big-time in ballet, despite 10 years of lessons. And she never got to wear a tutu either, which still sort of bothers her. But writing about a wannabe ballerina almost makes up for it. Almost. Fiona Finkelstein, Big-Time Ballerina!, is her debut middle grade novel and is the first in a new chapter book series from Aladdin, an imprint of Simon & Schuster. Shawn K. Stout has a M.F.A. in writing for children and young adults from Vermont College. She lives in Maryland in a very old house, with her husband and two dogs.

Give us the Twitter-pitch for Fiona. (Meaning, sum up your book in 140 characters or less!)

Fiona wants to be a big-time ballerina—to dance on a real stage with a real curtain—and the only thing standing in her way is a flat out awful case of stage fright.

As a kid, you aspired to be a zoo keeper, dolphin trainer and a monkey. Do you think you’ll ever write a book about any of those things?

Do you think it’s weird that I didn’t want to own a monkey, I wanted to be a monkey? There’s a story in there somewhere, I think. About a kid who wants to be a monkey when she grows up? Or, maybe not.

What’s your background in ballet?

I took ballet lessons from the time I was about four years old until I was fourteen. I danced in a number of recitals, and yes, I even had a part in The Nutcracker as an angel. Unlike Fiona, I never got to wear a tutu, which still sort of bothers me. As an angel, though, I did have a golden trumpet that I danced with. (Actually, it was a cardboard tube wrapped in aluminum foil and spray painted gold.) So I guess that kind of makes up for it.

Poor Fiona threw up on mean girl Benevolence and was dubbed Fiona Vomitstein. Did you ever have a moment like this when you did ballet?

Thankfully, no. I did get terribly nervous when I was backstage before a recital, but I never had Fiona’s “Vomitstein” experience on stage. I was a nervous kind of kid and frequently had an upset stomach, so I do remember throwing up in public a couple of times (much to my older brother and sister’s horror and embarrassment). Does that count? But nobody called me Vomitgirl or anything like that. At least I don’t think they did.

I was thrilled to see the cover! It was the first time my book seemed real to me. Until I saw the cover, there was a part of me that was convinced I’d made the whole thing up and there really was no book.

What was the most difficult part about writing Fiona?

I’d have to say the beginning, the middle, and the end.

Your Website says you love miniature horses, but haven’t been able to convince your husband to add one to the family yet. Do you think you’ll be able to use the release day of Fiona as a way to convince him? (I mean, I see it as leverage…)

Oooh, I like the way you think. The problem he has is that I would want the horse to live, or at least sleep, inside our house. Which may sound crazy, but they make rubber soled shoes for miniature horses so their hooves won’t scuff the floors. It’s true. I’ve seen them. Let me tell you, there is nothing cuter than a miniature horse in high top sneakers.

How will you celebrate release day?

We’re having a book launch party at the Barnes and Noble in Rockville, Maryland. It’s going to be loads of fun. Want to come?

Can we expect to see more of Fiona?

Finally, to young girls who aspire to be something, whatever that is, what would Fiona tell them?

Fiona would say: “Flat out face your fears and try not to throw up.”

PS- HUGE apologies to Shawn. This interview was supposed to run a couple of weeks ago. I thought I set it up to auto post and I didn't. *head desk*

PPS-Shawn is awesome enough to offer a signed copy of FIONA to 3 random commenters! Leave your comment here (or on LJ) and I'll draw a winner on Friday. :)

hi jessica! i looove canterwood crest books snd i can't wait for best enemies to come out! fiona finkelstein, big-time ballerina sounds like a good book and it would be cool to have a signed copy.

I'd love to enter.

sounds cute. i always wanted to take ballet lessons - never quite happened though.

I was lucky enough to read the first few chapters while Shawn was working on this at Vermont College and I can't wait to read how it ends!

I would love to be randomly selected, but if not I'm sure I'll end up buying a copy.

I can't wait to read Shawn's book! I, also, got a peek at Vermont College. And I saw the book last night at my local Barnes and Noble. Yeah Shawn and Fiona!

Great interview! I may have to google 'miniature horse in high-tops' now. Can't wait to buy & share this book, it sounds great. Thanks Shawn!