Yesterday was the third photo shoot for the Canterwood series!! We were shooting the covers for books 9-12 and it felt like a reunion of sorts, seeing my girls and the crew. I'm only posting pics that were Tweeted yesterday either by Editor K or I. The rest, hi-res beauties, will be posted around the releases of books 9-12. And maybe a few early ones here and there just to tease. ;) Or, I might post pics for that specfic cover when it's finished and I'm allowed to share it. Then you guys wouldn't have to wait until 2010 to see the videos. That would be sad.

It was a fantastic day. I was up at 4something and the S&S crew (yep, I'm including myself in there) rode together to NJ for the shoot.

We got started around 7something and wrapped around 7:30 that night. Everyone was fabulous and it was the best shoot ever. The covers (ahem, Jessica Handelman) are going to be *insane*. In the best way. Thanks, also, to Russell Gordon for adding his artistic eye to the shoot. 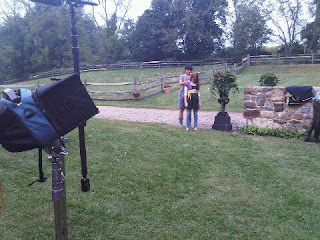 That's Paige Parker getting a wardrobe adjustment as we get ready to shoot. Aren't you guys excited to finally see Paige on a cover?! 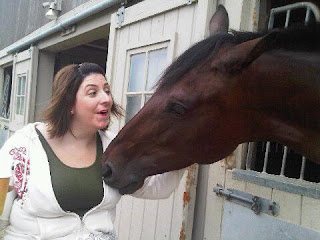 This is Editor K almost losing it when Zoe, the bay, tried to sniff her. The coversation after this shot:

Editor K: *shooting shocked/pretend-furious look at Totally Innocent Author* OMG! Why didn't you save me? That horse was about to eat my jacket! You didn't warn me!

Innocent Author: *swallows and fears for her life* I didn't know that was gonna happen! *then laughs not so quietly to herself*

Then full out laughter from both parties ensued. Editor K was also later chased by a bee which, apparently, I should have saved from from as well, LOL. Ooops. 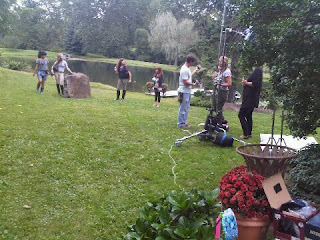 We're getting set up for the first shoot of the day. The models, who are the *sweetest* girls, can turn on the attitude so fast for the camera. Amazing. 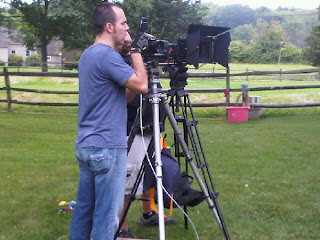 One of our photographer's assistants getting the camera ready. Heavy duty, huh? 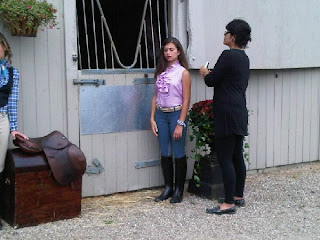 Finally, my main girl Sasha getting her hair touched up before a shot. Aren't you in LOVE with her shirt? I think this was right before the horse drooled all over her when he stuck his head out of the stall door. She was so great about and got cleaned up and kept going.

Sooo....I also vlogged. All day. I interviewed each model, the stylists and took lots of behind the scenes footage of hair and make up. I'm still figuring out how/when I'll be releasing the vlogs. I reaaalllly want to show you guys all of the video RIGHT NOW. :)

Enjoy the pics and know that when I told the models how much support there is for Team Canterwood, they said to say a huge THANK YOU to all of you who read and love the books.
at September 10, 2009

can't wait for the vlog postings and those FANTASTIC covers :)

OMG~! What FAB pictures!! I cannot wait for the covers and the awesome videos!!
;)

Wow!
I am so glad paige will be on a cover!
The pictures look awsome.Cant wait for the covers.i love Sashas shirt!

that looks so fun!!

Yay!!! cant wait for those vlogs and the covers of the new books! also cant wait to see paige!!! <3 her!!!!
p.s. that jacket eating horse has the same name as me =O

omg cool! can i get on a cover?
lol cilck my blue writing :)

OMG cant wait!!! this is my fave book series, i want all the books!!! I've read all the ones i have twice already..

canterwood crest is THE best book series!! I have read all the books like 10 times already! cant wait for Jealousy to come out, I have been waiting on it FOREVA!!!

I'm a big fan Jessica! Thanks for sharing. I have all your Canterwood books! There my fav series ever! Your a very talented writer. Please check out my blog at:
http:soccerswimminggirl.blogspot.com
THANKS

Wow, this was all so long ago...all I can say is that 2020 was a ride. Get ready for it. Enjoy these moments while you can.