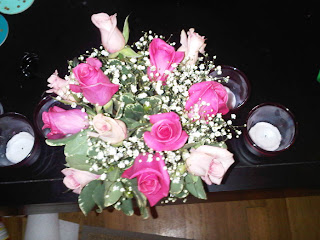 I opened the door expecting to have a package from UPS with stuff from work or something I'd ordered online. Instead, a nice guy asked for Jess Ashley and handed me a vase of flowers.

Kate and Ross got me flowers for my two year anniversary in New York. According to the card, I'm now a "true New Yorker."

Sometimes, it feels like I've been here for ten years. Sometimes, a week. I still get lost on new trains, still go the wrong way when trying to find strange buildings and still Google Map any new place I go and hand draw a map. But I'm not afraid of going to new places.

When I first moved here, the only place I felt that I knew how to get back and forth from without having to worry was to S&S. I would get on the train at 7th Avenue, put on my headphones and ride the 45-ish minutes into the city. And that's not to mention how long it took me to feel comfortable to play my iPod because I was sure the conductor would change the route with a message that the train was going to the Bronx or somewhere far away. I was convinced I'd get lost and never find my way back to Park Slope again. (Not being a drama queen--I was serious!)

But now, it's almost as if I instinctively know how to get home. And home for me is the best place to be in the entire city. I'm happiest when I'm in cozy socks, yoga pants, a PINK t-shirt and doing anything--or nothing at all--with my bestie.

If you passed me on the streets, you'd probably think I was a tourist. I've always got my BlackBerry out and am taking pictures of everything. I wear Brooklyn hoodies, a "Gaga for Brooklyn" (she's performing on May 27 for GMA, btw . . . )T-shirt and it'll soon be warm enough for me to wear my "I love New York" shirt. I know that it's not "cool" to do that when you live here, but I don't care. I haven't gotten past the giddy stage of living in the city that never sleeps.

I'm a Brooklyn girl and proud of it!

Much love to all of my Brooklyn family and friends who have supported me here. I love you all.
at April 05, 2011