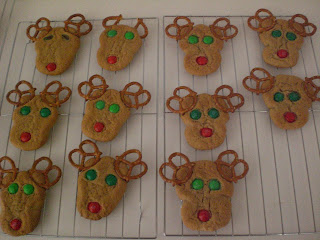 Those are reindeer peanut butter cookies that my mom found in a holiday book. Adorable, right? :) They're so sweet.
Last night, Barbara Walters did her "10 Most Fascinating People of 2007." Anyone else see the show? She named David and Victoria Beckham, Jennifer Hudson, Justin Timberlake and Bill Clinton among others. Her number one? British. Female. Magical. Got it? JK Rowling! Again, what another honor for her.
If you had to make a list of the "10 Most Fascinating Writers" (dead or alive) who would make your list?
People such as Poe, Twain, Woolf and Dickens, all of whom had interesting lives come to mind.
at December 07, 2007

Those cookies are just the cutest thing!!! I may make them for gifts.

Yummy, those cookies look good. Didn't see the 10 most fascinating special, though I have it on the DVR. I have no idea whom I'd include on an author list. J.K. would definitely be on it as would Meg Cabot, since I adore her and her books. Other than that, I don't know.