What's everyone up to this weekend? Anyone getting in the Christmas spirit or totally over it? I walked down an avenue block last night after picking up food and so many gorgeous lights and displays were up. I'm like a little kid--they make me SO happy. I live in a very diverse neighborhood and it's interesting to see how each culture decorates for Christmas. There was a Puerto Rican parade today that went down my street, though, I don't think it had anything to do with Xmas. ;)

I'm totally bumming around this weekend. Recovering from post-finishing a book hangover. Next book--COMEBACK--isn't due until March, so I've got some time to chill. I intended to start working on a project today, but chose to read (Ruthless--Pretty Little Liars #10), Teen Vogue, Glamour and some other fun mags lying around. 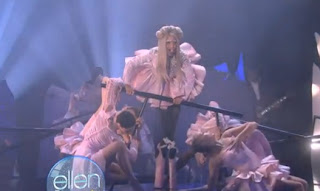 (CHECK those shoes! I'd *never* be able to stand in them!)

Did anyone catch yesterday's Ellen? Lady Gaga and Greyson Chance we on. First, I adore Greyson! Kate and I saw him the very first time he appeared on Ellen singing "Paparazzi." She discovered him singing that on YouTube, brought him on, signed him to her record label and well, you probably know more than I do about him now. ;) He's such a cutie!

It came full circle for him because he got to meet the artist whose song he played that got HIM a record deal. :) 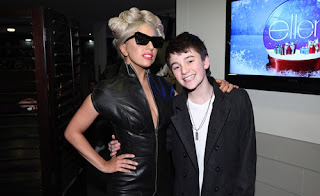 I loved Lady G's "Marry the Night" performance. She also had some of the best one liners I've heard from her. I've always been insanely inspired by her work ethic. The song, too, is about making the choice to commit to your work or give up. She's barely a year older than me and the girl works hard. She said, "People ask me when I'm gonna take a vacation. I'm like, 'I didn't get into signing to sit under a palm tree.'" That's kind of how I feel about writing. I'm "married" to my work because I love it so much. I'm happy to work long hours (except when my wrist or arm hurt! Bleh!) and I want to put everything I have into what I'm doing. That's for you guys--the readers--Team Canterwood.

Here's her performance if you want to watch. :) Fill me in on what you're all up to this weekend!

I'm actually will be at a family birthday party for my cousin and I tomorrow (Sunday). I'm also be typing-slash-writing. And did you mean by March of 2013?

Nope, I meant March 2012. That's when the manuscript is due to my publisher. It's not the on-sale date for the book. :)

I'll be setting up Chrisymas lights with my dad, and reading the bunch of books I bought on Black Friday. Can't wait for Initiation!

Greyson is soo cute! There is a kid in my neighborhood that looks exactly like him, but he is a big jerk, so.... NOT him. I hope. :)