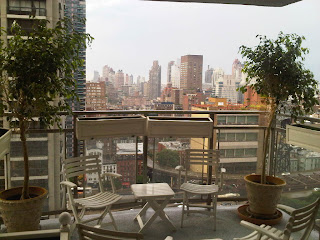 I'm blogging from the most beautiful view that I've ever seen in Manhattan. Slept in Manhattan for the first time on Friday night. Am in a building where there are doormen, elevator men and security that won't allow you up unless you show your key or they call the person's apartment. There's central air. And gorgeous plants. There's a terrace that's begging to have a writer sit and compose a novel.

But the apartment and all its beauty has the most important piece of it missing--Allen R. Kate's great-uncle passed away last week. We got the call early Friday morning. Kate, battling her own illness, flew into superwoman mode and did the first thing her great-uncle would have wanted: began thinking about how to care for her grieving grandmother--Allen's sister.

Kate and Gram (I also call her Gram because she's adopted me in the family) have a special bond that cannot be described. They know when something's wrong with the other even though they live six hours apart. Gram helped Kate through some of the most difficult periods of her life and has been there to share some of the biggest joys.

Kate is still in the same amount of pain, has no diagnosis--just an educated guess and is on trial medication. But it isn't working. We're retuning to the Mayo Clinic in September for more tests. I know I haven't updated you all on her condition, but I was waiting to see how her body would react to the new medication. It was devastating to come home from Mayo and still not know what is wrong. We're looking forward to going back and having even more tests run. Again, I thank you all for the support. We still talk about it and it hasn't been forgotten.

I'm talking about Kate's illness in relation to her great-uncle's passing because it shows what kind of person that Kate is. She has been by her Gram's side, holding her at night, preparing to be with her at the appointments to wrap up her great-uncle's affairs all while not saying a word about her pain and trying to keep it from being visible on her face.

Her great-uncle was a war vet with a Purple Heart. He was a private, strong, intimidating, smart man who attended Harvard and traveled the world. He was a huge presence in Kate's life--a man she wanted to impress with grades, work, writing, etc. Kate lived at his apartment during the first few weeks of her time at Simon & Schuster until Ross found their first apartment in Brooklyn. Yesterday, Kate found her edit test and resume that ultimately led to her becoming an editor and now a full time freelance editor, author and co-owner of Violet & Ruby.

Allen will never see Kate's first book on the shelves, but he passed knowing his great-niece had achieved her dream.

I am in awe of Kate's strength during this time when she is also grieving and dealing with her own medical problems. She got her strength from her grandmother.

We will probably be staying on the Upper East Side for a week or two. There's much to be done, but we're all working together.

So, if you haven't said "I love you" to someone today or haven't called a friend that you've been meaning to call, do it now. Don't wait. Life can change in an instant.
at June 19, 2011

Jess, you and Kate are so amazing. Hope she gets better soon, and I can't wait to read Initiation!

Kate seems like the perfect person/best friend. Supportive, caring, and able to help other even when she is feeling ill. I really admire that. I hope that Kate will be okay :)

!!!!!!!!!!!! I cannot believe Allen R. (is it rude that I address him with his name?)got a Purple Heart!!! That is THE highest award a soldier can receive!!!! Kate is so brave to help her grandmother when she's still battling her own problems! I'm sure some hospital or clinic can give Kate the help she needs.

I am SO sorry for you and Kate. I am keeping her and her grandmother in my prayers. She is so strong to be able to push away her illness to help someone truly in dire need of her help. <3

Jess, your an amazing friend to be helping Kate through all of this! I wish I could be as strong as Kate and aside my pain to help someone else.I don't know how you would be JESSSICA BURKHART without Kate! Your awesome, Emily

i know what it is like to lose a best friend. mine died just last year. all of my prayers are with you and kate, and i'm also very sorry about her great uncle. since he received a purple heart, i know that he fought very hard for his country. good wishes and hope to you and kate.

You two are so strong! And Kate your amazing!! I'm so sorry for your loss, you and your aunt will be in my thoughts and prayers :) i hope you can find out and cure your illness soon as well! You are so brave i know you can get through this!
XOXO