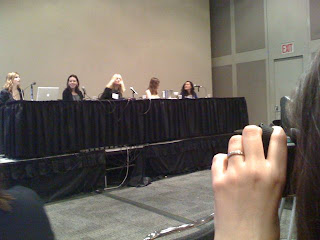 A pic snapped by Lauren Barnholdt's Boy of LB taking pics of us on the BEA panel. (I shamelessly stole this pic and a couple more (noted below) from L's Twitter.) Left to right: Robyn, me, Julia DeVillers, Maureen Johnson, Sarah Mlynowski. 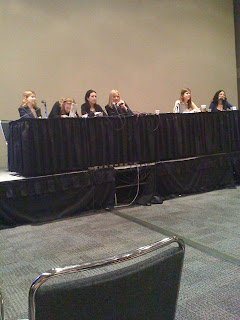 Another pic taken by Lauren of the BEA panel. The woman on my left is the technician who saved us all with a super important power cord for Robyn's Power Point. 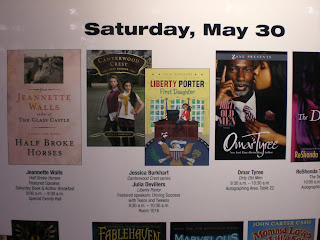 I almost died when I saw the cover of BEST ENEMIES at the S&S booth on this board. So cool! :) 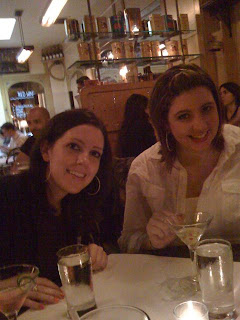 Editor Kate and me at drinks with Lauren Barnholdt (Team Barnhart!) and her Boy. So fun! Much to EK's dismay, after Lauren snapped that pic with her iPhone she Tweeted it. EK is kinda anti-Twitter. Just kind of. ;) 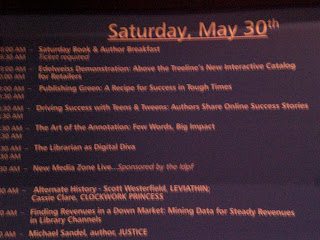 A blurry pic of a board at BEA that announces the panel line ups. Driving Success with Teens and Tweens: Authors Share Online Success Stories was my panel. 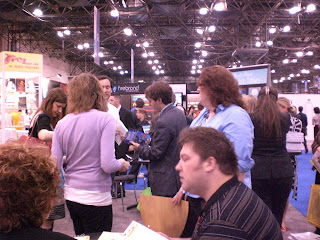 Well, look who it is! THE Kaleb Nation signing copies of his book and chatting with David Levithan and Maureen Johnson. 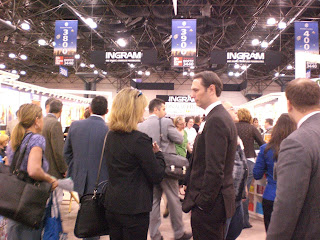 Almost to the Simon & Schuster booth. The crowd was insane.

I've barely been home since Thursday and have had nooo time to blog. A quick run down of Book Expo America 2009 and the NYC Teen Author Carnival *needs* telling. So...

This was hosted by three superawesome teens--Devyn, Mitali and Korianne. It was a fun, crazy two hours of Q&A, meeting readers, signing books and mingling with authors. It was my first NYC author event, so I was nervous before I got there. But everyone was relaxed and there to have fun. It *was* a carnival theme, after all.

After the carnival, Lauren and her Boy, EK and I went out for drinks. We had so much fun and I already knew from emailing and texting that I'd like Lauren in person, but she was even cooler--if that's possible! There will most def be future Barnhart events, so stay tuned. :)

The Javits Center is HUGE. It has to be said right away. I thought the crowd would be scary and overwhelming, but it was actually the opposite. It was fun to be around so many people who were there with a love for books. I met up with Robyn in the morning and we hurried to get in line for signings for Ally Carter and Sarah MacLean. We got our books, then ran into Lauren and her Boy.

We spent a couple of minutes chatting with Kaleb and wished we had more time, but Kaleb was super busy (he had a signing line, hello) and everyone's schedules were a mess. (But Kaleb, it was so great to finally meet and come back to NYC soon so we can hang out for real!)

Robyn had a meeting, so LB, her Boy and I wandered the floor for a while and checked out the various booths.

Lauren and I went to the S&S booth to check it out and ran into a lot of our S&S friends. Lauren had to run off to a business lunch, so I spent the rest of the day hanging out with the super fab LA. I loved that we both had enough of the BEA noise/crazy atmosphere at the exact same time and were like, "let's go hijack an empty meeting room and chill for a while!"

After being at BEA from 9-5, I was exhausted. I got home, ate, looked over notes for my panel and crashed by 8:30.

My panel started at 9:30 and it was exciting to be sitting with Maureen Johnson, Julia DeVillers, Sarah Mlynowski and Robyn Schneider. EK, Nova, LB and a few other people I knew came to the panel, which was super sweet for them to get up early on a Sat and come. I also got to meet LiveJournal friend Jenny Moss. So cool! Lauren took more pics of the panel with Robyn's camera, so I'll post when R puts those online.

After the panel, I left BEA to work for a while and then headed off to the S&S party. It was amazing! I got to meet a couple of editors at Pulse that I hadn't met before and chatted with other S&S authors. Plus, I got to see publishing friends I hadn't seen since January and it was so good to say hi and see them again. S&S picked a great place for the party and I think everyone was having fun. Perfect way to end my BEA experience.

I probably forgot a lot, since the days were packed, but those are definitely some of the highlights. I'll keep posting about it next week if/when I think of things.

I'm forcing myself to ignore the shiny books from BEA until I have at least a few pages of the chapter by chapter outline of LITTLE WHITE LIES down. Will not stare longingly at book pile... :)