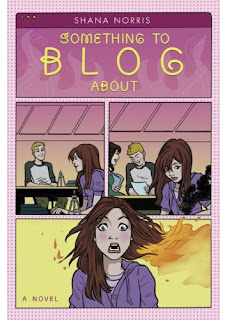 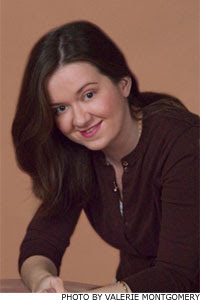 Tell us why you decided to write SOMETHING TO BLOG ABOUT?

I first created the characters of Libby and her friends twelve years ago as a teen and had written stories off and on throughout the years about them. But I could never find a story that I really liked, although I loved the characters. I put them away for a few years and decided to focus on writing fantasy. So I wrote this big fantasy trilogy and tried to get an agent for it, but I had no luck at all. So while taking a break from the fantasy one day in early 2005, I remembered those old characters I’d written about and decided to try them out in a new story. I was inspired to do a blog story because I’ve kept an online journal/blog for over ten years now and during college my own secret blog was discovered by some of my classmates. I didn’t have all of things that happen to Libby occur because of being found out, but it was still a little embarrassing. So I started with just the very basic idea of a girl who writes a secret blog being found out, and let the story unfold from there as I wrote it! I had a lot of fun with this story.

I love the title! Did you come up with it?

Thanks! I love the title too, but I can’t claim it as my idea. The original title of the book was LIBBY FAWCETT’S SECRET BLOG, but my publisher felt that was too similar to another YA blog book’s title so we all tried to think of a new one. One of the suggestions from the team at Amulet was SOMETHING TO BLOG ABOUT. I loved it and it was much better than anything I was able to think of, so we went with it!

How long have you been writing with the goal of publication?

I’ve been seriously focusing on writing and trying to get published for about six years. It’s been a long, frustrating road, but it’s been worth it!

Can you give us the gist of one of your favorite scenes in SOMETHING TO BLOG ABOUT?

One of my favorite scenes is a fight scene about halfway through the book. I have never been in a fight at school, so I had to really stretch my imagination and figure out what it might be like. But this isn’t just a fight, it’s also funny, so I had to imagine what it’s like to be in a fight and also give a humorous look at it. The fight is one scene that has always been in the book, from the very first draft, and it was actually really fun to write just because it’s something that I could never imagine myself getting in the middle of.


ell us a bit about your first book signing. What was that like?

It was so much fun! I was really nervous all day leading up to it and during the ride there (it was a two hour drive) I kept telling my husband that I was sure I was going to completely blank out when it came time to talk or pass out from nervousness or something. But when it came time to speak, I surprisingly found myself a lot more calm and relaxed than I expected I would be. It was great being in front of a group of people who were interested in hearing about my book and my experiences in writing and getting published. They asked a lot of great questions and the staff at the store were so nice and supportive. Also, I got to meet the girl who wrote me my very first fan letter in January (she got an advanced copy of the book from her mom, who runs the bookstore where I was speaking). So that was really exciting and something I’ll remember forever!

You keep an active LiveJournal. Do you think it’s important for authors to try and make that sort of connection with readers and other writers?

I do, especially if you’re writing for teens. Teens today are all over the internet and blogs are really popular, so it makes sense for authors to have a web presence to connect with their readers. As a reader, I visit the websites of authors I like because I want to learn more about them. Blogs provide a great way for readers to get to know their favorite authors better and also provide a means of feedback, if the author allows comments on their blog.

What did you read as a kid?

My favorite thing to do as a kid was visit the library. My mom would always take us on weekends and I’d come home with a huge stack of books that I’d have read within a couple days. I loved the Baby-Sitters Club and Sweet Valley Twins series (still do!)

Was there one book, movie, etc. that inspired you to become a writer?

I don’t know if there was any one thing that inspired me to become a writer, because I’ve known since I was about ten years old that I wanted to be an author and I don’t remember being affected by one thing in particular. It was really just my general love of books that made me want to write. But the movie 10 Things I Hate About You did inspire me to become a YA author instead of the fantasy author I thought I would be. I love the fun storyline and the look at teen life and every time I watch it, it makes me want to write fun teen stories just like it.

What are you working on now?

Right now I’m working on my second book, which my editor and I are kind of keeping under wraps at the moment, until it’s done. We’re really excited about it! I can tell you that it’s a modern day retelling of a story from Greek mythology. So I’ve been immersing myself in research lately and loving it!

Would you give readers a writing tip?

Have fun with your writing. The first draft is meant to be messy, it’s just a starting off point for the good stuff that comes out during revisions. So don’t stress too much about getting it all right the first time through. Just get the foundation in place, enjoy your characters and the basic story, and then build up the rest later.

Shana Norris is a Web designer by day and a writer at night. She lives
with her husband in Kinston, North Carolina, where she actively posts
on her own blog. She decided to become a writer after realizing that
her dreams of being a ballerina-architect weren't going to come true
because she couldn't dance and didn't like getting dirty.

My website: http://www.shananorris.com
My blog: http://shanawrites.livejournal.com
My book on Amazon:
http://www.amazon.com/Something-Blog-About-Shana-Norris/dp/0810994747
All right! Shana is generously giving away one signed copy of SOMETHING TO BLOG ABOUT. To enter, leave a comment on BlogSpot, LiveJournal or in both places. You have until Sunday, 9pm EST to enter. Winners will be announced on Monday morning and you have 48 hours to claim your prize (directions on Monday) or I'll draw another winner. Good luck!
at March 21, 2008

awesome interview. i think i am going to go buy this book. :D thanks for the contest too!

I can't wait to get my hands on this book.. :) Great interview, Shana and Jessica!

I've been dying to read Shana's book! She lives not too far from me, so her stalkability is high, too. ;)

this looks like a very funny book.
i would love to read it!

If I don't win, I know I'm going to go out and buy this book: Shana Noris sounds so interesting and compelling. Thanks for the chance of winning it!

Great Interview! Something to Blog About sounds great =]

Love the interview. I'd be freaked to talk in front of a bunch of people too, but I'm glad it went well.
This book does look great! I love reading blogs as well.
Great contest. thanks for the chance. :)

This book sounds like so much fun, please enter me!

Love the interview and the book looks great! It is great your having this contest!

What an interesting person! I love the cover of her book! It sounds like a fantastic book to read. Reading a book with humor in it right now would do me good! Please enter me in your drawing. Thanks,Cindi
jchoppes[at]hotmail[dot]com

Love the interview! I would love to win a copy of this amazing sounding book!!!

Enjoyed the interview and the read dounds great!

i always see shana's book in a great spot in my brooklyn barnes and noble! can't wait to read it, especially now that i know she's a fellow carolina girl!

Please enter me - this sounds like an awesome book!