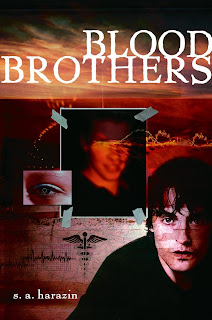 Please welcome author S.A. Harazin! Her novel, BLOOD BROTHERS, has been nominated for an Edgar. It's also an ALA Quick Pick.

Without his job at the hospital, Clay would be lost. The hard work, the struggles of the patients, the drama in the ER—they make his days seem worth something and give focus to his dream of someday becoming a doctor. Clay can’t afford to go away to college like the rest of his class, but what other seventeen-year old has delivered a baby or helped to save a life?

Still, Clay wishes his life could be more like his best friend’s. Joey has it all—a great family, a good college waiting for him at the end of the summer, money, a car. Clay has to bike everywhere, and the miles are starting to wear him down.

But Joey’s bright future shatters one day when he overdoses at a party. Now he’s clinging to life at the hospital where Clay works—and Clay may be blamed for his condition. Clay will do whatever he can to find out what happened at the party, and to help Joey recover. But to survive this ordeal, Clay must draw on a strength he never knew he had.

What was the moment when you KNEW you had to write this story?

I am not sure there was one moment. Many years ago I took care of a kid in the intensive care unit, and during that time I was thinking, this is something I won’t ever forget. Over time, a story grew from that incident, and then one day I decided to write it. I first wrote Blood Brothers as a short story from the viewpoint of a nurse. This story was published in a literary journal. Later I decided I had to write the story from the viewpoint of someone who was not merely an observer.

Are you a disciplined writer or do you write when you feel like it?

What’s your favorite thing about being a young adult author?

I love getting mail from teens and listening to them. I have never met a teen who is not interesting.

I like to sew and play video games. Role playing games are my favorites.

I love being a part of 2K7. We’ve helped each other and provided support and advice.

If someone came up to you and said, “I’ve tried a thousand times to get an agent, but I can’t!” what advice would you give him/her?

Have someone who is good at queries read your query. Get your manuscript critiqued or have a professional critique. Join SCBWI. Read the posts on Verla Kay’s message board. It isn’t easy for most people. Don’t be afraid of rewriting or starting over. Keep trying.

What are some of your favorite young adult novels?

There are too many to list. I’ve recently read “The Adoration of Jenna Fox” by Mary Pearson and “Night Road” by A.M. Jenkins and both were terrific.

I only work on one project at a time.

I am working on a young adult novel about a teen with a genetic defect. He learns about life from a dog, a girl, and a killer. I plan to rewrite another wip in the near future. It is about a boy and his doctor. I don’t usually say a lot about my wip—I tend to loose steam if I talk about something too much. It’s a little like letting the air out of a balloon.

S. A. Harazin lives in with her husband. She has two kids attending college and one about to start. She worked in a hospital as a teen and became a registered nurse. Much of Blood Brothers is loosely based on real life experience.

Ms. Harazin is generously giving away two signed copies of BLOOD BROTHERS. To enter, leave a comment (on one or as many of the 3 blogs as you like) on Blogger, LiveJournal or Homeschool Blogger to enter. You have until Sunday at 9pm EST to get your entry in. Two winners will be drawn at random. Good luck!

WOW, this book sounds FANTASTIC. I really, really want to read it now!! Thanks for sharing the blurb and holding a contest!!

Her wip's sound SO interesting!

This is book sounds fantastic! Please count me in!!

This sounds like a great read, count me in!

I remember reading this when you had the first chapter posted on your web site, linked in either Verla Kay, or SCBWI, I forget now.

Anyway, it really pulled me in, so much that it was an unpleasant jolt when I got to the end and the rest wasn't there. I'd gotten so into it, I forgot I was reading an excerpt.

Congrats on your success, and I'l look for this on the shelves.

Wait, what was the contest? Need to go back and read the rest more carefully. :^D

What a fabulous contest! I would love to win this book for my niece. Please enter me in your drawing. Thanks,Cindi
jchoppes[at]hotmail[dot]com

May I be entered? It sounds like an awesome book ^_^.

Awesome interview! Thanks for this great contest! I really want to read this book; it sounds awesome! Count me in!

thanks for having a contest, I really want to read the book!

I've read BLOOD BROTHERS. It's excellent! This book should be part of any grade 7 & up collection.

Blood Brothers was one of those books that I couldn't stop thinking about even after I had finished. I felt such empathy for Clay and his situation. I thought it was a terrific book!
Deb

I like the whole idea of being Clay being both the savior and the victim of blame in this book. It sounds really intriguing. I can't wait to find out what really happened at the party.

LOVE the sound of this book. Count me in!!!!