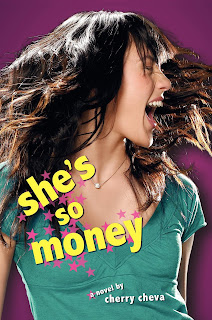 What happens when a good girl teams up with a total player and creates the biggest scandal their school has ever seen? Popular guy convinces Maya that the only way to save her family’s Thai restaurant is to do other kids’ homework for cash, and she soon finds out that everything has a price. Especially falling in love.

How long did it take you to write SHE’S SO MONEY?

Hmmm, probably about eight or nine months? Something like that—including revisions and the fact that I was writing it mostly on nights and weekends.

Did you have an agent submit SHE’S SO MONEY, or did you do it on your own?

I was lucky to have an agent already, from working in TV, so my agent handled it.

What’s one of your favorite scenes in SHE’S SO MONEY?

Anything where Maya and are just snarking at each other, like the early scene where they’re hanging out in his basement, and whenever they’re driving around in his car. Scenes with just the two of them interacting were so much fun to write.

You write for FAMILY GUY. That’s so cool! How long have you been writing for the show?

Eeek, I think it’s cool too! :) It’ll be four years this summer.

What does writing TV teach you about novel writing and vice versa?

Well, dialogue goes in both things, so having a background in TV was great for that when writing the book, and obviously in both you always want to have a good strong story. But in TV and especially on “Family Guy,” you tend to want to do things fast and keep everything moving along, because you only have 22 minutes to get everything done, whereas in novels there’s a more leisurely pace and room for details. TV writing is also very collaborative—you write drafts by yourself but then you rewrite them with everybody else, so I was totally used to working with other people by the time it came to working with a book editor.

How do you juggle writing for TV and writing novels?

Um, badly? :) Truthfully, it kind of sucks. I’m at work all day, sometimes until two in the morning, and then I have to come home and write more? Yuck. So I actually tend to be kind of a weekend warrior, at least until there’s a deadline staring me in the face, and I try my best to take advantage of any vacation time we have from the show.

How has the writers’ strike affected you?

It was a bummer—a necessary bummer, but a bummer. Obviously it was all for a good cause, but picketing was not particularly fun (I’m not an outdoorsy girl, so instead of welcoming the hours in the sunshine, I was cowering under a big hat the whole time), and it totally sucked to see a lot of people, like assistants and artists and other crew, get laid off through completely no fault of their own. I’m glad it’s over!

In your opinion, is active self-promotion important for middle grade and young adult authors?

h, absolutely. You could leave it to your publisher’s publicity department if you wanted to, I guess, but hell, the more publicity the better! Plus it’s been totally fun getting to do this stuff I’ve never done before—blog interviews and myspace and whatnot. I’ve done a bit of promotional stuff for “Family Guy” before—Comic-Con and some radio interviews—and it’s always fun to interact with fans, so all of this has just been super cool so far.

Family Guy as usual, and I’m in the beginning stages of my next book. And by “beginning” I mean mostly “thinking about it but not really writing anything yet unless it’s on a post-it note that I subsequently lose track of.” :)

Cherry Chevapravatdumrong ("Cherry Cheva") is originally from . She currently lives in and writes for the hit Fox TV show "Family Guy." She's So Money is her first novel.

I forgot to mention, but you guys know the drill, you have until Sunday at 9pm to enter. :)

i have this book, but i thought i'd stop by to say great interview. i loved the book :D

It was a great interview. I like the part about the writer's strike. Cherry seems very upbeat.
--Anon #1 with no Blogger ID

Can't wait to read this novel. Count me in for the copy and the tee. :) My entire family, including my ninety-year-old grandma, love Family Guy. Great interview, Jessica and Cherry.

Really good interview, Jess. I'm sending all my YA writing friends over. :)

Hope you're writing is going well.

This book sounds like SO much fun - I've heard great things about it.

Lovely Interview!
Would love to read this book

Thanks for a fantastic author visit. My two teenage sons and their father think there is nothing like the
"Family Guy" show. Your book cover is fun! Love it. Please enter me in this wonderful contest. Thanks very much!
Cindi
jchoppes[at]hotmail[dot]com

Aw, Cherry is so nice! Loved the interview Jessica. Great questions. :)
Definitely enter me. I really want to read the book.

Holy che mama. I've been dying to read this. -drool- Enter me in, baby!

My brother is obsessed with Family Guy... he'd steal the tee. -glares-

I still haven't gotten the book yet (boo!), so a chance to win one would be neat. Go Cherry! It's good to know she's representing us females in the writer's room.

This book looks awesome! I've been wanting to get a copy of it for a while, but have been short on moneh, so winning one would be awesome! *hint hint*
I love Family Guy, and have listened to some commentaries with Cherry, and I really like the work that you're doing. Keep it up!

I've read so many good things about this book, so definitely enter me please ^_^.

Can you make it an Evil Monkey shirt? That's definitely the character I identify most with on Family Guy!

Enjoyed the interview and the book sounds good!

Great interview! I can't wait to read the book!