It's true. Kristen cheated on Rob 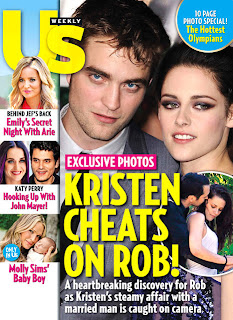 Sad. So, according to, well, EVERY magazine it appears that Kristen Stewart did cheat on boyfriend of four years--Robert Pattinson.

Not going to judge Kristen or her choices.

Instead, I wonder if this will affect the final movie, BREAKING DAWN part 2, when it hits theaters. Will people be in love with Bella and Edward knowing that "Bella" cheated on "Edward?" Did K. Stew and Rob's relationship make their love in the movie that much more beautiful? Or would the films have turned out the same if both actors had hated each other?

Personally, I liked that Kristen and Rob were an off screen couple. As a crazy Twilight fan it made the Bella/Edward scenes a little more romantic knowing the actors were together in real life. I'm not going to pop in NEW MOON and scream, "Edward! Find someone else! Bella cheated on you!" Um, if I DO . . . please call the closest psychologist and make me an appointment. ;)

As an outsider who loves the books and movies and has grown to know and love the actors, I hope K and R work it out if it's meant to be. For everyone's sake, I hope their PR team doesn't get anxious and try to force the two into a fake romance until BREAKING DAWN part 2's premiere.

What's your take on this sitch?

You do realize it could be someone like family doing this as a hug? Did you read the story or have you just seen the photo?if they don't say a name the paparazzi don't know if its an actual affair or family but they gotta make money by making people look bad so... also the pap. might have just gotten a lucky photo. Idk, I haven't read the story but I'm just saying things don't always look as they seem, just the way the paparazzi like it.

LovindaHorses... sounds like she admitted it to People Magazine.

And I *have* to judge, at least a little. I mean, she was playing opposite CHRIS HEMSWORTH, and it's the DIRECTOR she chooses?! O.o

I'm going to stick my two cents in, because Kristen makes me mad. Rob was a catch, GOD! *throws up hands in frusteration*
Did you know that Kristen had a previous relationship with a BF before Robert, and cheated on that poor dude with Rob. Sounds like she did it again, but with her director!
Honestly, I'm ticked. She could very well be a homewrecker - what if Chris gets a divorce? He has two kids. They are young now, but they'll grow up knowing. And she broke Rob's heart.
Maybe they were having an actual affair, not just a kiss. Maybe they were confident they wouldn't get caught, and were comfortable enough to expose themselves by accident.
In all fairness, (and some judgeyness, yes, because I bet Rob felt like a kicked puppy) those were HER actions and HER choices that resulted in this. Gawd. I wash my hands of you, Kristen. If you meant to or not, it's still pretty mean.

Kristen did a mini interview where she said she was soorry for hurting everyone, especially Rob and the director's family, so it is true. It's sad that it happens, but I do think she still loves Rob, but just my opinion. They weren't married (not that it makes what she did any better), so I guess it's not as bad as everyone is making it. I hope they get together (or stay together, im not sure if they broke up or not) again. They were a great couple(: