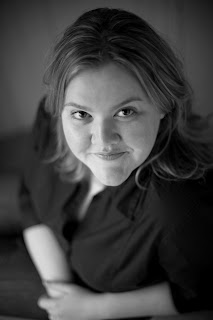 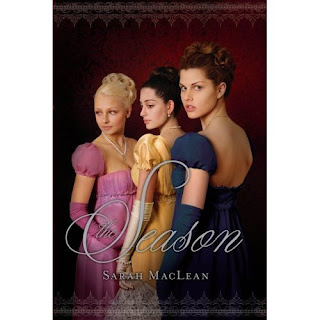 Lucky me! Sarah MacLean, author of THE SEASON (out now), stopped by!

Here's a bit about THE SEASON:

Seventeen-year-old Lady Alexandra Stafford doesn't fit into the world of Regency London — she's strong-willed, sharp-tongued, and she absolutely loathes dress fittings. Unfortunately, her mother has been waiting for years for Alex to be old enough to take part in the social whirlwind of a London Season so she can be married off to someone safe, respectable, wealthy, and almost certainly boring. But Alex is much more interested in adventure than romance.

Between sumptuous balls, lavish dinner parties and country weekends, Alex, along with her two best friends, Ella and Vivi, manages to get entangled in her biggest scrape yet. When the Earl of Blackmoor is killed in a puzzling accident, Alex decides to help his son, the brooding and devilishly handsome Gavin, uncover the truth. It's a mystery brimming with espionage, murder, and suspicion. As she and Gavin grow closer, will Alex's heart be stolen in the process?

Romance and danger fill the air, as this year's Season begins!


I asked and Sarah answered...

Did you ever have one of those, "OMG, I just can't do this!" moments while writing THE SEASON?

Wait. Are there authors who DON'T have that moment? Because I had it over and over and over and over again...and, if I were perfectly honest, I STILL have it. But...I'm very lucky to have an editor who was super encouraging, a husband who was more patient than one person should be, and a dog who was a thoroughly loyal companion.
That said, I don't believe writers who say they don't doubt themselves. Red Smith, one of the most widely-read sportswriters in American journalism, once said, "There's nothing to writing. All you do is sit down at a typewriter and open a vein." I had read that quote long before I started working on The Season, and always thought it was funny...but now I understand him. It's an immensely personal process...and then, when you're done, you can't help but feel that you're thoroughly exposed, and that's when the doubt sets in. What ifs? abound...what if they don't like it, what if it's not good, what if I can't do it again.
But then a great line pops into your head. Or you see a character in a new and different setting. And you think, "here we go again..." and you have no choice but to sit down and write. It's a crazy job, really. I'm not sure why we do it!

You live in Brooklyn with your husband. Does living in NYC inspire your writing? If so, how?

Here is the city that called to Walt Whitman and Edith Wharton and Willa Cather and Henry Miller and Jonathan Franzen...not to mention Andy Warhol and Keith Haring and Paul Simon and Spike Lee and countless other artists, musicians and writers. Every street corner has a story...this is where Paul Auster wrote Smoke. That's where Jungle Fever was filmed. Here's where Jerry Seinfeld got his start. There's where Libba Bray gets her morning coffee. I mean, it's enough to cause some serious performance anxiety.
I've always wanted to live in New York. ALWAYS. For as long as I can remember. And that's because there's such a rich community of artists and art lovers here...every person you meet has a story inside them. And you meet new people every time you leave the house. Love it or hate it, it's a city that is so very ALIVE...that has such a powerful artistic and literary legacy...it's hard not to be inspired.

Recently, you signed a deal to write three adult romances for Avon. Is writing for adults different than writing for teens?

At first, it seems pretty daunting to start a book for adults after being so steeped in writing for teens. You dwell on word choice way too much, you think about your characters and their motivation and question whether they seem too young. Or too old. But, about 25 pages in, you realize that young or old, teen or thirty-something, all readers come to books for the love of a good story. So you task yourself with that. Tell a good story. Keep them turning the pages.

I read that you're a huge fan of Jane Austen. What work of Jane's most encouraged you to write THE SEASON?

Wow. That's a great question. And a scary one, because I would NEVER DREAM of comparing The Season to one of Austen's books. She is the maestro...I, the lowly apprentice. That said, there are definitely moments that are homages to scenes of Aunt Jane's, and those who know Pride & Prejudice and Emma will recognize them.
Alex, Ella and Vivi are all enormous Austen fans...all three of them have strong opinions about Pride & Prejudice, ie, that there's never been a book quite as amazing as that one. Far be it from me to disagree with ladies of such discerning taste.

I'm a ridiculously heavy outliner. They run 40-50 pages and, while my characters tend to lead me down the garden path now and then, I always know where I should return. I'm amazed by people who can sit down at a blank screen and just write...I think I'm too much of a control freak to allow my characters that much freedom.
Once everything is outlined, I start from the beginning and write until the end. I don't skip around...the very idea gives me hives. I do write longhand mostly...I'll write in a notebook for an entire week and then transcribe/edit onto the computer on the weekends, so my first electronic draft is really more like a second draft than a first. I'm a pretty fast writer (though nothing like you!!) and I can knock out a manuscript in 4-6 months if I really work at it.

Finally, THE most important question! Your bio says that you don't leave the house without lip balm. From one lip gloss addict to another, what's your favorite kind?

All right! Run out and get your copy of THE SEASON! Find it at Amazon or IndieBound. Also, check out Sarah's blog for more. :)

OMG! This book sounds absolutely perfect for me and my oldest niece!! Can't wait to read it.:)

PS: That cover is gorgeous!