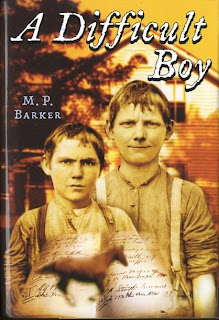 It’s 1839. To help his family pay off their debts, nine-year-old Ethan is indentured to Mr. Lyman, the wealthy shopkeeper in their small town. Ethan tries to befriend the Lymans’ other indentured servant, but Daniel, as everyone says, is a difficult boy. Sixteen years old, Irish, and moody, Daniel brushes off Ethan as if he were a pesky gnat. Ethan resolves to ignore the brusque older boy, but is then shocked to see how cruelly Mr. Lyman treats Daniel. Soon, Ethan, too, is suffering Mr. Lyman’s blows, and the two boys realize that they must overcome their differences to survive.

Where did you get the idea for A DIFFICULT BOY?

The idea came from a bill that I found in the archives where I work. This master had chased down a runaway indentured boy and sent a bill to the kid’s mom for the cost of looking for the kid, hiring someone to help look for the boy, court costs, and the value of the boy’s lost days of work. That got me wondering why the boy ran away, what kind of mean old skinflint the master might have been, how the mother was going to pay the bill, etc., etc., etc…and all that wondering led to the story. The boy became Ethan, the master became Mr. Lyman, and eventually the rest of the characters began to take shape.

What’s one of your favorite things about the year 1839?

Well, first of all, I got paid to learn about the 1830s when I worked at . So one of my favorite things about 1839 is simply that setting the story in that year made the research easier!

Really, though, there were lots of exciting things happening in the 1830s, though people kind of overlook that period because they tend to concentrate on times when there was a war going on, like the Revolutionary or Civil War eras. The 1830s was a real transitional time in . The Industrial Revolution was in full swing, railroad construction was booming, and all those pioneers were pushing further and further westward. Those changes affected every part of American life--what people did for work, where they lived, where they could go. If you think about how much computers and cars changed people’s lives in the 20th century, that was how much manufacturing and railroads changed things in the 19th. was beginning to change from a rural agricultural society to a more urban, industrial one. It’s interesting to see how people coped with all those changes in their lives and compare it to how people cope with those kinds of big changes today. It’s also interesting to compare the attitudes and beliefs people had and see how much (or how little) they’ve changed.

Why did you decide to write for kids and teens?

Well, actually, I didn’t really decide—Ethan and Daniel, my two main characters, decided for me. They just wanted me to tell their story the best way I could, and because their ages make them characters that young readers can identify with, the book ended up being a YA story. But I wasn’t thinking about markets or audiences or any of that stuff you’re supposed to think about before you start writing—I was just thinking of the story. If you’d asked me back then who I was writing for, I would have said, “Ummmm…people who like to read?”

Your Website says you worked as a costumed historical interpreter at . What was that like? How did it prepare you to write A DIFFICULT BOY?

Well, right off the bat, let me say yes, it was hot in those clothes, and no, people weren’t much nicer back then. (I think those have to be the two most asked questions at OSV.)

Working at OSV was dirty, smelly, back-breaking, and LOTS of fun. It was one of the most physically demanding jobs I ever had, because I had to milk cows, muck out barns, chop kindling, work in some hu-u-u-ge gardens, and even the mundane daily chores of cooking and cleaning involved a lot of heavy lifting. It was also mentally challenging because there was so much to learn, and we had to be really good at thinking on our feet to answer all questions that got thrown at us. I loved that I might be getting down and dirty fixing fences and playing with the baby animals one day, and then the next day I might be spinning yarn and weaving cloth or wearing a ballgown and demonstrating period dancing or going to a recreated Sunday service at the meetinghouse.

Certainly, doing many of the chores that my characters did and eating the kinds of foods they ate, smelling all those barnyard smells, etc., gave me a better feel for their world than just reading about it in a book. And discussing on a daily basis the attitudes and beliefs that people held in 1830sNew really helped that information sink in so that it was easier to draw on as I wrote the story. I also had a lot of friendly experts in the form of former co-workers that I could call on if I couldn't remember something or needed some fact-checking done.

What’s one word that best describes A DIFFICULT BOY?

I hope it’s “authentic”—at least that’s what I was striving for.

If you could give advice to aspiring young writers, what would you say?

Don’t give up your dreams. When I was about twelve, I wanted to be a novelist. But I quickly put that idea aside because I thought it was “unrealistic.” (Little did I know I was going to spend nearly ten years playing make-believe at OSV.) I did lots of nonfiction writing for school and work projects, but it wasn’t until many years later that I started writing fiction again. I'll probably always wonder what would have happened if I'd kept writing fiction instead of putting it aside for so long.

From the time I started writing A DIFFICULT BOY to having a published book in my hands took about ten years and 75 rejections. There were plenty of times where I was discouraged, depressed, and desperately in needs of massive doses of chocolate and Ben & Jerry’s ice cream in the single-serving container (that would be the pint…although if they had it in quarts…well, let’s just say I’d be a LOT bigger!). But somehow I got there, so persistence and perseverance definitely pay off.

It’s also important to have lots and lots of supportive friends who can keep you going when you’re getting those 75 rejections…and who’ll supply you with those giant blocks of chocolate from Trader Joe’s (thanks, Maggie!). I definitely would have given up if it hadn’t been for many kicks in the butt from my friends—and I have the bruises to prove it…

You’re a member of the Class of 2k8. What exciting things are going on with the Class?

Where to begin? What’s most exciting for me is getting my classmates’ new books in my hot little hands. There are three other April 2k8 books--Zu Vincent’s THE LUCKY PLACE, Debbie Reed Fischer’s BRALESS IN WONDERLAND, and Marissa Doyle’s BEWITCHING SEASON--and Jennifer Bradbury’s SHIFT is coming out in May. There’ll be brand new video trailers on the 2k8 website (www.classof2k8.com) for this month’s books, and every newly launched author is featured for a week on the class blog (http://classof2k8.blogspot.com/), so you can get more juicy details about the writers and their books.

Like free books? The Class has a name-game scavenger hunt at http://classof2k8.com/index.php?id=80 where you can answer ten questions for a chance to win three of this quarter’s books. If you’re in a book club and want some ideas for discussion topics, you can download readers’ guides for all the 2k8 books on http://classof2k8.com/index.php?id=85. The 2k8 site also has links to all the 2k8 authors’ individual web pages. Readers who are only just finding out about 2k8 can catch up fast by reading about our January to March books at the class’s web page or past blog posts.

It’s also exciting to see 2k8 books getting kudos and stars from reviewers and bloggers. One book is already in its second printing, some have been Booksense picks, and several of our members have contracts for their second books. I feel like I’m in such exalted company—I hope I can measure up!

What’s next for you? Any new projects?

I’m working on a sequel to A DIFFICULT BOY that follows Daniel, the older boy, through new adventures that include a peddler (who’s also a musician and dancing master), a conjurer, a circus with six dancing ponies, Irish railroad workers, and a child custody battle. Also in the works (though on hold until I finish this book) is a story about a sea captain’s wife and daughter and how they cope after he’s lost at sea.

JB note: I am SO glad there's going to be a sequel! I adored this book and am so thrilled to have hosted M.P. A DIFFICULT BOY is a must-read. Go get a copy!

Autographed copies can be ordered from the following booksellers:

Bio: I’m kind of a time traveler—well, actually an archivist and historian, which amounts to the same thing. I got a firsthand taste (sometimes literally!) of nineteenth-century New England rural life when I was a costumed historical interpreter at . There I milked cows, mucked out barns, and found inspiration for A Difficult Boy. Now I’m an archivist, which officially means I sort and catalog old documents—really, though, it means I get paid to read other people's diaries and letters and snoop through their photo albums.

**Want to win an autographed copy? You know the drill--leave a comment here or on LiveJournal or in both places to enter. You have until Monday (an extension!) at 10am to enter. I'll draw a winner by random draw and will announce it on Monday. Good luck!**

Sweet! I really want to read this book.

This book sounds great, I'd love to win a copy. =)

Loved the interview. This sounds like such a great novel. I would love to win a copy, but if I don't win I think I will still and go buy a copy:)

Great interview! I vote for a sequel.

I so totally want one! It sounds like a fantabulous book!

Sounds fascinating! Thanks for the giveaway.

Happy Friday, I love the cover of the book! It reminds me of my dad in his childhood pictures. I didn't know that boys became indentured servants like that! I enjoy reading historical fiction and it sounds like a lot of research was put into the book. Please enter me in your drawing. Many thanks,Cindi
jchoppes[at]hotmail[dot]com

Awesome interview!! and thanks for the contest!

I think my mom would really love this. :)

Enjoyed the interview and this sounds like a really great read!

Thanks for all your kind comments! Good luck to everyone!

i would love to be entered :D (yesterday was my b-day, does that count for extra?)

I'd love to be entered. (: Seems like a great book.

I love historically "correct" novels. Thanks ....Please enter me.