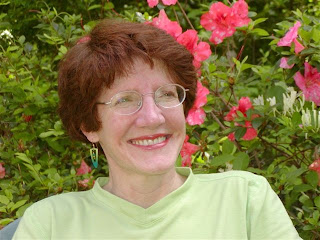 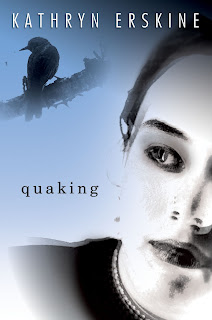 First, how wonderful that QUAKING was chosen as a 2008 Quick Pick for Reluctant Readers! That’s fantastic! How did you get the news? What was your reaction?

A good friend of mine called me early that morning as I was heading out of town to a critique group meeting. I was SO excited because encouraging reading is one of my goals as a writer. Writing a "Top Ten" book for reluctant readers, those who would rather do something other than read, hopefully means that my writing is compelling enough to make people WANT to read.

How did you come up with the plot for QUAKING?

I was concerned about why we were in and how people respond to war and violence in general. That's why I didn't make it Iraq-specific but it obviously speaks to our current situation. I also wanted to relate the issue of violence in war to a more personal level. Matt is going through her own post-traumatic stress syndrome. War or violence in any form has powerful effects on individuals and society. I wanted to raise questions and awareness but not necessarily answer the questions. Those are issues for thought and discussion. Finally, the Quaker tenets of peace and tolerance were a good backdrop for the story and gave me an opportunity to share with readers what I've learned about Quakers.

I’ve read reviews for QUAKING and they’ve been great. But how would you handle a bad review?

I firmly believe everyone has a right to say what they think and how they feel about a book. Books are subjective and are going to appeal to some people and not to others. The bottom line is you have to read a book for yourself to decide what you think. Nobody else can tell you how you feel about it.

I love QUAKING’s cover! Did you have any say in it?

I did but I think my editor had a much better idea. I'd love to claim it as mine! I think it's brilliant.

Did it take long to write?

It took a little over a year to write. Once it got picked up by a publisher there were revisions, of course, which helped tie the threads together and make it a stronger story.

When you’re not writing, what are your hobbies?

I love traveling, exploring just about anywhere and anything, walking, spending time with family and friends, playing games (card, board, strategy, Sudoku, etc.), and I've just taken up fencing (the sword kind) -- look for that in a future book!

Who are some of your favorite authors?

Oh, gosh, there are so many! Some of those who have influenced me through their work or their wisdom are Katherine Paterson, Patricia Reilly Giff, Judy Blume, Jerry Spinelli, Patricia Lee Gauch, Lois Lowry, and Christopher Paul Curtis.

Who's one author you haven’t met whom you’d love to meet?

Christopher Paul Curtis. I LOVE his writing and his voice is so funny and thoughtful and caring all at the same time that I can't help believing he's like that in real life, too.

What advice can you give first time authors who have a book coming out soon?

Try get your book and name out there. It's not something most publishers have time or money to do for you any more. Even if you're an introvert, like a lot of us are, you can still talk to friends and keep an active website. And don't get discouraged. Your local Barnes and Noble might not carry your book even if you get on and VOYA lists (mine still doesn't) but that's a factor of upper management. A lot still seems to happen through word of mouth and small, independent book stores (love those guys!) so you can still get your book out there.

Are you working on anything new?

Since QUAKING, I've submitted a novel about a 14 year old boy that, while it has serious undertones, has some pretty wacky characters. Right now I'm finishing up a novel that handles serious issues but has humor, too. Next is either my novel set in , or my historical novel, both written in draft but needing work. That's if I don't get sidetracked by my latest idea (another 14 year old -- yes, I seem to be stuck at that age!) or one of my many other novels in progress. So little time, so much to write!

Kathryn Erskine spent many years as a lawyer before realizing that she’d rather write things that people might actually enjoy reading. She grew up mostly overseas and attended eight different schools, her favorite being the Hogwarts-type castle in Scotland. The faculty, of course, did not consist of wizards, although . . . how did the headmistress know that it was “the wee redhead” who led the campaign to free the mice from the biology lab? Erskine draws on her childhood—and her second childhood through her children—for her stories. She still loves to travel but nowadays most trips tend to be local, such as basketball and tennis courts, occasional emergency room visits, and the natural food store for very healthy organic chocolate with “life saving” flavonoids.
Summary of QUAKING:

After years of being batted around, fourteen year old Matt has learned to rely on herself at school and everywhere. Biology is good. I am an expert. We are studying morphing, but I have already morphed. I have my own exoskeleton. . . I have spent years developing my armor and I will not let it be pierced. She must call on all of her resources to handle Mr. Warhead, the Rat, and the Wall at her new school, not to mention the Beast in her head. But somehow it is even more difficult to cope with the warm Quaker family, her "last chance," who has taken her in. Why does Jessica insist on acting like a mom? Why can't their little boy with his gack covered fingers just leave her alone? And why does Sam have to care about her--and everything--so much? Doesn't he realize that only gets you hurt? And even though Matt knows that pain very well, why is she finally letting down her armor and allowing herself to care?


Kathy's generously giving away ONE signed copy of QUAKING and tattoos of the jacket and peace stickers to a lucky commenter! Leave a comment on Blogger, Live Journal or both spots to be entered. Your comment must be received by Sunday at 9pm. A winner will be drawn at random and announced on Monday. Good luck!
at February 22, 2008

Great interview!
The book sounds really interesting, I can't wait for the chance to read it. =D

Great interview of a book that goes a little deeper than teen love and angst.

I met Kathryn Erskine very briefly at a middle school in West Virginia where we both were doing author appearances. I am in awe of her work and her presentations.

Quaking sounds like a different kinda book. i should really check it out. thanks for the interview

Great interview and excellent advice!! I loved your comments about bad reviews and the publicity part of the book business. Quaking sounds fantastic.. Can't wait to read it!

Wow, that interview was great!! Quaking has captured my interest.

Enjoyed the interview and glad to see you here today! Quaking sounds like a good read.

Loved the interview. This sounds like a great book, and it seems to talk about some really important issues. Count me in for the drawing!

What a fantastic interview and what sounds like a great book to read! The prize package Kathryn is giving away is very generous. Please enter me in your drawing. Thanks,Cindi
jchoppes[at]hotmail[dot]com

Thanks for your comments, everyone! Linda, I'm in awe of YOUR presentations! You're a pro! Thanks, Jess, for the interview, your blog, and your support of fellow writers. Happy reading and writing, all!

i have read Quaking and i can't wait for more , it was wonderful. i have given it to several friends and they all loved it too then their kids got to read it , they all agreed... waiting for more ,