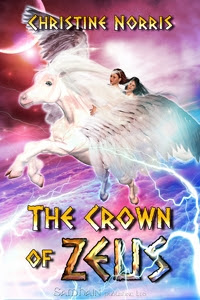 What made you sit up and say, "I have to tell this story?"

Wow, that's right to the point, isn't it? Let me see. I had the idea for this book, this series, way back in...2004, maybe? I think I wanted to write a bunch of shorter stories about a magical library. Because to me, magic IS in the words, always has been. There's something so...mystical, I guess, about writing. The process still amazes me, how our human brains can pull a story together. When I sat down to write it, it developed into something so much more than that. I've kind of mapped out the rest of the series in my head, and it's going somewhere I never imagined when I first had the idea. It's so much bigger now. I was talking about it to another writer, and she said to me, "This could be your signature work." Which is really, just, a mind-boggling idea to me.

Did you do any research for your novel?

This novel and the next one are heavily researched. Becasue they entail a lot of mythology, I spent a great deal of time looking at Greek mythology. Not as much as I did for the next book, which is based in Egyptian mythology. That one was more difficult to wrap my head around. The third novel (in progress) involves Chinese mythology, which has proved to be even MORE difficult. I take artistic license with many things, but I at least want to know what I'm taking license WITH. LOL.

I also use a lot of maps. THE CROWN OF ZEUS has scenes inside The Parthenon. Wanting to be as accurate as possible, I called up an interior schematic of the temple, to kind of put my characters in the proper space. It was very helpful. For the second book, I had a small map of I used, because there is a lot of traveling from place to place.

Where do you do your best writing?

That depends. Some days I just sit with the laptop in my living room, TV on. Sometimes I need the quiet of my bedroom. When life gets really busy, I take a notebook to work and handwrite, then come home and type it all up. That way works well, because I have the seeds planted and I just need to cultivate them. I usually wind up with twice as much typed material as I had handwritten, because I get on a roll. I also seem to write better in the evenings. I just can't get it started in the mornings for some reason.

What are you reading now?

I have a large stack of TBR books. ALEX AND THE IRONIC GENTLEMAN, by Adrienne Kress, and SEARCH FOR THE RED DRAGON, by James Owen, are on the top at the moment. I also have some classics here in the stack, like FROM THE MIXED-UP FILES OF MRS. BASIL E. FRANKWEILER, which was just reprinted last fall and is one of my all-time favorites.

If your character were real, what would he or she think of you?

Oh, sheesh, I don't know. She'd probably think I'm some old lady. LOL. Actually I hope we'd get along well, and she'd think I was cool. I'd love to live in her house, I can tell you that!

If your book were a movie, whom would you like cast to play the main characters?

Hmm...I've often thought about THE CROWN OF ZEUS as a movie. I honestly don't know. I'd like to think we'd be able to do something like they did with the Harry Potter movies and cast some great unknown young actresses to play the four girls. It'd be interesting to see who would fit in those roles, because they're all so different, and they pretty much carry the whole story. Everyone else is just background.

Give us a one-sentence sales pitch for your book.

Ah...this is the tagline from the publisher's website: Which is worse: Having to start life over, or being eaten by a Minotaur?

What are you working on now?

Well, we'll be starting on the edits for the second Library of Athena book, THE ANKH OF ISIS, which comes out in e-book format in July. Somewhere in between college courses and work and all that stuff, I have the third novel to finish. That's my main project for 2008 at the moment.

Christine Norris is the author of several works for children and adults. She spends her time divided between her writing, substitute teaching, and caring for her family of one husband-creature, a son-animal, a large dog whose greatest achievement is sleeping in one position for an entire day, and a small feline who is very adept in his position as Guardian of the Bathtub. She also works at English Adaptations of novels translated from other languages.

o learn more about Christine Norris, please visit http://www.christine-norris.com. Send an email to Christine at risseybug@aol.com or through her MySpace page, at http://www.myspace.com/christinenorris.

A little info about the book. Title :THE CROWN OF ZEUS (The Library of Athena, Book One)

**Winners in the CONVERTING KATE giveaway will be posted tomorrow!

Hi Christine,
I like your casting answer, it's fun watching unkown actors and actresses that turn out to be awesome charaters that you don't forget.