So. It was almost ten. I was in PJs and just ready to get back to writing.

Then Mr. Frank brought me dinner. He forgot to get me a napkin and despite my protests, he started back down this stairs to get one.

I heard a yelp and crash and bolted out of my apt.

Frank had fallen ten or twelve steps. His left ring finger was bent at the knuckle at a 90 degree angel. If I hadn't been running on adreline, I would have passed out. His left ankle was rapidly becoming the size of a basketball.

I got him back of up the stairs--barely--and he told me where to get his ID, credit card, etc.

I changed out of my PJs and called for a car. We went to a hospital in the 60s on Third or Fourth Ave in Brooklyn.

They took xrays. And drew blood. And fixed his dislocated finger.

Thankfully, he only has a fractured foot. Not saying that his injury is awesome, but if def beats the alternative--if he'd tripped and gone down head first. His back is brushed all up and down his spine (owweee) and he's got a light cast on his food and a splint on his finger.

But, like EVERY other ER I have ever been to, we were there forever. 10pm to just after 7am. And they gave him a ridiculously tiny amount of pain killers for the injuries he had. It was a typical hospital.

I got him settled into my bed and he was asleep in two minutes. Leesi is currently keeping him company. :) And as much as I complained in this blog, I would do it again in a heart beat. No one should ever have to go to the hospital alone. He would have done the same for.

So he's asleep and I'm about to head to Crystal Kingdom in Unicorn Magic! :) 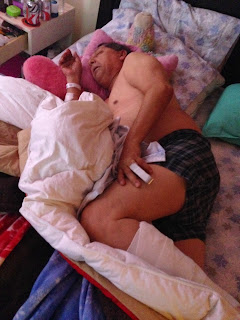