A fave series coming to an end

I'm so sad that one of my all time fave series is coming to an end! Sniff! 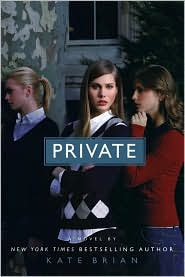 The first book released in June 2006 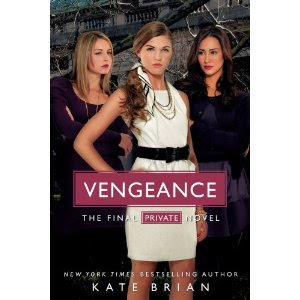 The final installment in Sept 2011
The last PRIVATE book by the ubertalented Kate Brian will be released on September 6, 2011. I loved the title, VENGEANCE, and cannot wait to read it. I've got such mixed emotions about it. When I get addicted to a series, I want them to go on FOREVER. I feel that way especially about Private. It was series that Kate introduced me to. She sent me the first four books and that was a mistake on her part, LOL. After that, I kept begging (read: bugging) her for the latest book.

The series is one of my ultimate favorites and it really is one that is memorable for me. 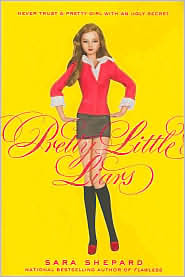 Another series I devoured was Sara Shepard's Pretty Little Liars series and just finished WANTED a few episodes into season one of the show. So, yes, I know who "A" is (no spoilers in the comments, please!!) and it's so fun to watch the ABC Family show and see where they take it. I actually like having read the books and then comparing them to the show. Alloy and Sara put together something insanely magical--a fast-paced murder mystery that's hot, funny and full of cute boys. What more does a girl need? *bows to genius Sara*

I read that ABC Family picked up The Lying Game (Sara Shepard's new series) and I have to grab that first book. There's only one out so far. It's interesting to me that a series was optioned based on only one book being released, but I'm guessing with the success of PLL and Sara's track record, it was a no-brainer. I can't wait to watch the progress of the show and see how soon it'll be on air. 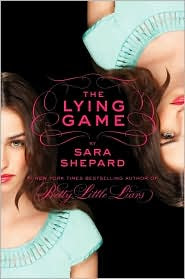 But back to Private. I've read most of the books at least three or four times. I haven't read VANISHED or OMINOUS yet--have to get those. I started THE BOOK OF SPELLS and then got crazy with my deadline. But it's a book I want to go back to ASAP.

Email ThisBlogThis!Share to TwitterShare to FacebookShare to Pinterest
Labels: books

Jessica,
I'm glad you posted this entry. Private is one of my absolute FAVORITE series EVER. The series is the reason why I started writing teen fiction actually. When Ominous comes out, I'm going to buy it, read it, then start reading the series over again. But my question is, what book do you start with first? The original, "Private", "The Book of Spells", or "Last Christmas"? Guess I'll just have to email Kate myself.
Enjoy the last few books!!!
Jen

I dont know pretty much the only sieries I'm reading is CANTERWOOD CREST, and this series is now the never ending series soo.......

Meg Cabot is one of my favorite authors, and I read the Princess Diaries for a very long time! Although it came to a natural end, I was still a little bit sad. I also loved her Airhead series, but wouldn't have wanted it to go past 3 books, because you can only stretch an amazing story out for so long.
And, of course I'm addicted to Canterwood:)

The Twilight series, The Lightning Thief series, Sarah Dessen books(not really a series but they are all similar), Canterwood,....,etc. This list could go on forever. I actually have a name for the way I feel after finishing a series... I call it Post Series Despression or PSD.

I used to love Warriors, but they sorta... died... at least in my opinion. I also love Redwall & well, I guess the series is over now (RIP Brian Jaques), but since there really isn't a continuing 'series' as it's all stand-alone books just around the basics of the Abbey, Martin the Warrior and Salamandastron, it's not like there's a big plot point left unfinished. I like the Mysterious Benedict Society (OH MY GOSH AMAZING BOOKS EVERYONE GO READ .NOW. lol :)), but the ending was kinda so-so. I just read the Foundation Trilogy as well, and that just sorta kinda rocked. The ending was good, too, though I haven't read the sequels and prequels yet. And, of course, Canterwood isn't over yet.

One of my favorite series was The Unicorn Chronicles. The fourth and last book came out last year, and even though it ended extremely well I was sad there wouldn't be anymore books.
Even though Canterwood isn't over yet, it is in a way for me since the main character has changed. Looking forward to getting to know Lauren Towers though!

I love The Clique, BabySitters Club, Canterwood (duh! :D) and some friends from the forum have INSISTED that I check out the Hunger Games series, so I'll get back to you on that, lol.
<3, DQ

Cool, i read PLL during camp but then i forgot which one I was on. It was like everything was fine until one stupid action. Some of my fav. series are of course Canterwood Crest, the Seekers, Chronicles of Darkness, Wolves of the Beyond, and so many more. I feel sad that a series end b/c i wont get to hear from that author anymore.

I LOVE Canterwood, obviously, so I DO NOT want it to end. Luckily, though, you're planning for 20, so I'm not worrying. I can't believe you were going to stop at four...

My favorite series is The Immortal Series by Alyson Noel. I also liked Wicked Lovely series by Melissa Marr and the Need series by Carrie Jones. If you are into fiction, like immortals(Immortal series) or faeries(Wicked Lovely series) or pixies(Need series) then you will definitly be hooked. I know pixies and faeries are a little. . . umm. . . childish, but once I got to the first sentence I loved it!

~Kathleen (I read a lot, BTW)
(By the way, these books are young adult!)

Hey, you, Miss GorgeousGirl... Wanna nekk in Heaven? Think about it. God bless you --- PS you're most certainly free-as-the-wind to plagiarize ANY of our hardcore, hardboiled, avant-garde-efficaciousness (big word for a small verb: remedy-ness) from any of our 11 blogs. Why dost I doest such an altrustic objective, my just and fair liege? I wanna kiss you in the Great Beyond and, besides, they weren't given only to me, saith God. Just lemme nekk with you after we croak, k? You know we are after 88ish years, silly girl... Be at peAce (I was gonna have an 'anarchy' forming the A [anarchy means 'no rules', not lawlessness or any of the ungodly angst punks say]).