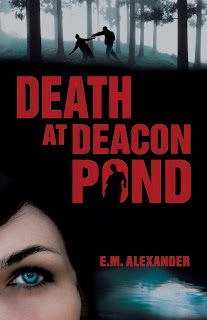 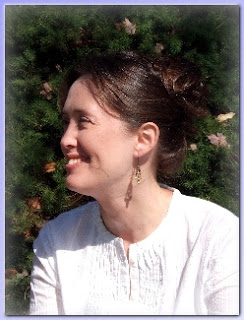 It's my great pleasure to welcome author E.M. Alexander!

E. M. Alexander began working at the age of six, delivering newspapers up
a steep, and decidedly creepy, hill called Robert's Rd. She has worked as
a student library aid, a pizza maker, a tee-shirt maker, as well as a
receptionist and bill-collector. A freelance writer for
a local newspaper and one of the 2006 recipients for the Barbara Karlin
Grant, E. M. Alexander resides in Connecticut with her husband, Phillip,
and her son, Ethan. "Death at Deacon Pond" is her first novel.

Ever since her father's suicide, Kerri Langston has been tortured by
visions of his violent death, leading her to believe that he was
murdered. With no way to prove her theory, her psychic visions only serve
to upset her mother and give her the reputation of being a "freak." When
Kerri stumbles upon a body in the woods near Deacon Pond she realizes her
visions are not limited to her father's death, and that her strange
connection with the dead might help solve a crime – if she can convince
the police to trust her this time. What Kerri doesn't know is that there
is someone close to her who will stop at nothing to ensure that her
visions remain hidden. In this small town full of skeptics, who can she
trust?

What inspired you to write Death at Deacon Pond?

Death at Deacon Pond was a natural culmination of my early introduction to
horror stories and, perhaps, by spending way too much time in the woods
with my tattered copy of Grimm's Ghost Stories that I would read a zillion
times, just trying to perfect the stories to retell to my friends.
I also developed a real fondness for scary movies, even though I'm a total
wimp who shouts stuff like: Get out of the woods! Don't open that door!
Stop swimming in shark infested waters! Still, I really appreciate "that
moment". You know the one. The one before the big scare. It's not the
moment that Jaws pops out of the water...it's right BEFORE he eats you for
lunch. THAT'S the feeling that stays with you long after you've left the
story. It's the creep factor. The GOTCHA! And, to me, that's a goal worth
writing for.

Tell us about your main character. Are you like him or her?

Kerri Langston is a girl who desperately wishes to be "a normal girl" but,
of course, is anything but. She sees dead people and, more specifically,
her father. She is haunted by how much loss her family has suffered. Maybe
I've watched too much "Buffy the Vampire Slayer" but I'm a sucker for a
character who has been bestowed superpowers, but doesn't feel special at
all.

I absolutely see myself in Kerri. She's the sort of person who doubts how
strong she is until she's given a chance to prove it. When it really
matters, she stands up for herself and for what is right and I respect
that.

What's your writing process? Are you an outliner or not?

I usually start with an action scene, something pivotol that tells me
about the story and the people in it. I try to visualize that scene well
and build from there.

I'm a Non-Outliner that would love to be defect to the Organized Outliner
Camp. I tend to make vague outlines that I don't stick to. Basically, I'm
always at war with myself!

What's one word that describes your book best?

Awesome? Okay. Just kidding. I'm guessing that's not allowed...)
Creepy. But not weirdo creepy. Creepy in a "the bad guy is always watching
and you might not make it out alive" kind-of way. There is a big
difference.

If your book were a movie, whom would you like cast to play the main
characters?

Ah. Welcome to one of my favorite daydreams! I would have Zooey Deschancel
play Kerri she's got those big eyes and husky voice. Chad Michael Murray
would play Seth because he has that sensitive jock vibe. And maybe Robert
Patrick as Officer Roberts because he's so serious. Very official.

Do you have advice for aspiring authors?

Step One: Read. Write. Rewrite. Rinse and repeat.
Step Two: Believe in what you do.
Step Three: Acquire a writing buddy, mentor or special someone to remind
you to do Step One, especially when you've neglected Step Two. Writing is
tough and even the best of writers need someone to champion them from time
to time.

What are you reading now?

I am currently reading The Sweet Far Thing and avoiding anyone who has
already finished it.

Tell us a bit about your next project.

I'm currently working on a historical fiction called Apple Moon, which is
about a boy who, albeit reluctantly, rides the Orphan Trains to a new
life. Although the work is fictional, I did draw heavily from the factual
accounts of real riders. I have a tremendous respect for these kids, for
their resiliency. They had so much taken away, in manner that breeds
bitterness. Yet, many of them grew up to be the most giving of people.
That's what I've tried to capture in this book. I hope I've done them
justice.

Thank you, E.M. for stopping by! I hope you all have enjoyed her Q&A. E.M. is giving away TWO signed copies of Death at Deacon Pond. To be entered, leave a comment here, at LiveJournal or in both places. Have your comments in by 9PM EST on Sunday and my brother will draw two winners--one from Blogger and one from LJ. Check back on Monday morning for the winners!

death at deacon pond does look awesome! i think you can use awesome to describe your own book! it does sound creepy! i was thinking maybe even suspenseful!

please enter me in the contest! i would love to win this book!

Jess...thank you, thank you for starting this up!

Great insight on so many things. Thanks for your advice for us aspiring authors out here. It's so basic, but SO true and I need that ingrained into me sometimes. Interesting about the acton scene--I'm not sure I've heard of that approach but I like it! I've been searching for new techniques.

It seems like you're so in-tune with your book (as I'd hope an author would be!) but did you have any hang ups while trying to tell this story and how did you work through them?

this book sounds really interesting, i really hope i get to read it

This book sounds amazing! And great interview -- it was very informational.

I'd like to thank everyone who has visited so far for their kind words of support. It's very appreciated!

Did I have hang ups writing the story? Absolutely! Since it is a mystery, I was keenly aware that dropping clues had to be done in a timely manner without telling too much too soon. Simultaneously, I also had to cast suspicion on innocent characters to keep up the suspense. I relied on some excellent first readers to tell me when I was in danger of giving away too much too soon.

Another tool I used to limit how much the reader knew was to put some of the chapters in the "bad guy's" point of view. These chapters gave the reader access to the villian and showed what he was like, but still kept an air of mystery around him despite whatever clues where dropped.

Last, I did some reading up on weapons and crime scene investigation for authenticity. Nothing like hitting the books for pushing past plot problems. Research always leads to ideas!

Now that you are published, are you conflicted time-wise between promoting Death at Deacon Pond, and writing your historical novel?

Which part of the writing process do you most enjoy?

Congratulations to you, and best wishes for your continued success!

You bring up some points that I've thought about and some that haven't occured to me. I like the idea of using others or a critique partner to tell you if you're giving the mystery away! I'm mulling over the concept of including mystery in my historical novel WIP and I've been concerned about the pacing of the clues. And you're right about research! It's one of my New Year's Resolutions...to spend more time researching!!!

Yes, I'm absolutely conflicted between promoting "Death at Deacon Pond" and working on new projects, including my historical novel, which I've revised a number of times and is more or less complete (or as complete as anything is before it is put in book form).

Promotion can really push new writing to the back seat if you don't find some balance. I struggled with this a whole lot in the beginning, especially because I'm with a small publisher and self-promotion is pivotal. Now I remind myself to do what I can do while still being productive and the rest must be left to fate.

That and the Writing Gods, The Man Upstairs, and all other Powers That Be....

Many thanks for your kind words!

I love research, but I often get sidetracked on one fascinating detail after another.

Now I try to make notes in my "Idea" file for future reference, especially for those prime historical tidbits that really help set your story firmly in a specific time and place.

The book sounds really interesting and I'm glad I found this blog. I'll definitely bookmark it.

Thanks for the great interview, EM and Jessica. EM, how interesting that you start with an action scene. Your book sounds great. I will read it whether I win this contest on not!

I enjoyed my visit and learning about you, E.M., as well as about you, Jessica. Much success, both of you, in your writing endeavors. I tried to subscribe to your blog, Jessica, but somehow it didn't work.

Hello, I loved the interview and hearing the author's take on her book! Please enter me in your contest. Thanks,Cindi
jchoppes[at]hotmail[dot]com

Thanks for the great interview! I'm a big fan of the show Medium, so your book sounds awesome. Can't wait to read it!

Sounds like a great read count me in! tWarner419@aol.com